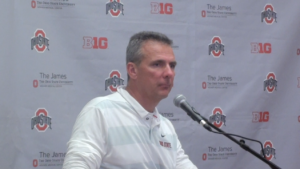 What did Urban Meyer make of No. 3 Ohio State’s 49-26 victory Saturday against Indiana at Ohio Stadium? After another Big Ten win, but not one without issues, the head coach assessed where the Buckeyes (6-0, 3-0) stand coming out of week six vs. the Hoosiers (4-2, 1-2).

COACH MEYER: Thanks for coming. As always, I’d like to thank our fans, packed house again. And the alumni. We had our pep rally on Friday and then a captain’s dinner. It was an awesome experience.

And then the pep rally or the skull sessions, just full house, it was a great day. So thanks to the alums for coming back. Thanks to our student body and Buckeye Nation. Dwayne obviously a great night. Incredible night, 455 yards, six touchdowns.

Still not offensively had a lot of yards, still not doing what we need to do in the run game. And that’s something that’s alarming. So we’ve just got to continue to work on that. Defensively not what we expected in the first half. Guys are making plays on us.

A combination of poor pass rush and not blocking on your guys. We’ve been fine against the run, but the pass has been killing us and that’s going to bite us, something we’ve got to get fixed.

Q. What happened to you on the sideline there where you had to go down for a while like you were in the 15-yard line or so out of the coach’s box, but I’m not laughing but you know what I’m saying, I understood —
COACH MEYER: Sure you are. (Laughter).

Q. But you ran into someone. What happened there?
COACH MEYER: I dealt with headaches in the past, I deal —

Q. It was a headache. It wasn’t a collision. Did you feel like you might have to leave the game at that point?
COACH MEYER: No.

Q. When did it come right for you, just a few minutes later?
COACH MEYER: Two minutes ago. No. (Laughter).

Q. The passing game, obviously like you just pointed out, I’m not saying bails you out again, the guy threw for 455. Parris Campbell and McLaurin and those guys, what did you see come alive as the game went on?
COACH MEYER: Dwayne would be the first one to tell you. And it’s no different than when the run game’s cooking, the offensive line is the reason why.

When the passing game is cooking, there’s guys making phenomenal catches and runs and the offensive line is doing for the most part. I believe we gave up one sack tonight. We did have the one — we had two turnovers, awful. But he’s an accurate passer now. You give him time and you give him a good group of receivers, he’s a dangerous guy.

Q. You’re 6-0 halfway through the season now. You mentioned the running game and defense. How close are you or how far away are you from being a championship caliber team?
COACH MEYER: We’re not worried about that. We’ve just got to get ready for Minnesota and you guys saw what I saw. At times we played outstanding. But the big hits and we’re a man coverage team. So we’ve got to keep evaluating. But some of those weren’t even on man coverage. So we just have to keep working at it. I trust our staff. I trust our players. We’re banged up a little bit. And we’ve got to fight through it. But gotta play better.

But I certainly never want to take away elite — 455 yards now. And high, high end percentage completion. It was 33 of 44. I mean, I’m not going to hold him back. But our focus is on Minnesota.

Q. You said you’re a press man team. We know you guys have been that since you switched to that. Is there any possibility of a consideration that in some situations backing off of that?
COACH MEYER: We do. If you notice we do bail sometimes. We hate to give free access throws to people. I think this was — it didn’t really snap at us like it did today. Penn State, guys made some plays on us. But today we really felt it. I felt it. That first half was awful.

Q. Do you feel like the teams maybe are thinking we’ll take some deep shots on these guys, maybe we’ll get a flag, maybe we’ll grab —
COACH MEYER: That’s what you’re seeing.

Q. Maybe they don’t fear you guys like maybe sometimes they have in the past that your guys are going to make a play?
COACH MEYER: We have very good personnel. Something we’ll keep working at. But your comment about are we going to take a look at other things, we already have.

Q. You mentioned the run game wasn’t what you wanted, the defense wasn’t what you wanted but you were able to take care of business. Last year against Iowa after the Penn State game you guys weren’t able to do that. Do you see that as a sign of growth wherever the team is this year?
COACH MEYER: I do. And we practiced very hard this week after getting in at 3:30 in the morning. We were worried about that a little bit. The heat was there again all week.

But you get out of those things and you go work on, fix some issues that’s what the game’s all about.

Q. And Malik had — Bradley both left the game early. What happened there?
COACH MEYER: They’re still being evaluated. I don’t know for sure yet.

Q. You put up a million yards, won by a lot, but there were a lot of things you said in terms of the defense being bad in the first half and things looking a little bit out of whack. I know at the end it looks great and everything you guys did was probably what you wanted to do is that what an Ohio State let-down is looking like this year; are you guys that good?
COACH MEYER: I’m sure the question. I guess the question is if that’s a bad game, do we still win like that, that’s a pretty good football team out there. We don’t look at it like that out there. We’re going to enjoy the win like we just did. We’re going to go back and start giving up close to 300 yards passing in that first half. We did make some adjustments in the second and played much better.

Q. How would you rate it?
COACH MEYER: How would I rate it? If I’m Parris Campbell, it’s a hell of game. Nine catches, 142 yards. Pass defense pass pressure, rush, no it’s not very good. Knocking people off the ball and running the ball I don’t think it’s great. I’ve got to watch the videotape. We’re just not consistent in those areas. Those two areas are the problem child right now.

Q. Good to see McLaurin can do more than block.
COACH MEYER: He’s a hell of a player. And like I told you — you start using the word Evan Spencer, see the way this kid plays he’s fantastic.

Q. Can you go as far as you want to go with an offense like this, as dynamic as it is, but a defense that gives up big plays, is there a tradeoff?
COACH MEYER: No, you can’t. At the end of the day you have to play great defense to get where you gotta get. And I’m confident that we will — because at times we’ve played great defense and we have to get everybody healthy and get back to that.