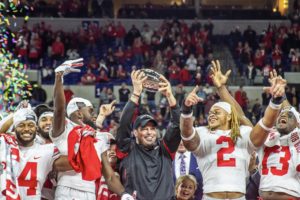 Ohio State head coach Ryan Day was added to the preseason watch list for Dodd Trophy on Friday afternoon, as the Bobby Dodd Coach of the Year Foundation and the Chick-fil-A Peach Bowl revised its previous list to include coaches from the Big Ten following the conference’s decision to play football this fall.

After the B1G news this week, we’ve update our watchlist. 🚨

“An unprecedented season calls for an unprecedented preseason watch list,” Bobby Dodd Coach of the Year Foundation chairman Jim Terry said in a statement. “When considering candidates for this year’s Dodd Trophy, the Bobby Dodd Coach of the Year Foundation made the decision to align with the College Football Playoff’s timeline and only consider coaches who will play during the fall season. That said, we still would like to recognize coaches from other conferences who met all of the criteria and under normal circumstances would be included on our list.”

As mentioned, coaches from conferences scheduled to play in the spring were also added to the list, though they are not eligible to win since it will be awarded in December. That includes Arizona State’s Herm Edwards, Oregon’s Mario Cristobal and Utah’s Kyle Whittingham from the Pac-12, as well as Boise State’s Bryan Harsin from the Mountain West. The only conference not represented is the MAC, which is reportedly exploring options to play this fall after becoming the first Football Bowl Subdivision conference to postpone its season in early August.

Named after legendary Georgia Tech head coach Bobby Dodd, the Dodd Trophy is considered college football’s most-coveted coaching award, celebrating success on the gridiron while also stressing the importance of scholarship, leadership and integrity. Things such as graduation rate, community service and team success are taken into account when selecting the winner.

Whittingham is the most recent winner of the Dodd Trophy, having led the Utes to an 11-3 record last season.