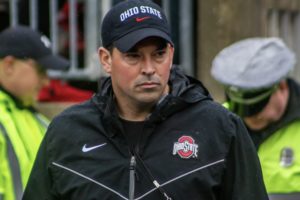 With Ohio State off this weekend, head coach Ryan Day made a guest appearance on ESPN’s College GameDay Saturday morning. He was live from Lewis Center (Ohio) Olentangy Orange, where his son, R.J., was playing in the background.

Ohio State returns to action against Maryland on Nov. 9. Kickoff is scheduled for 12 p.m. on FOX.