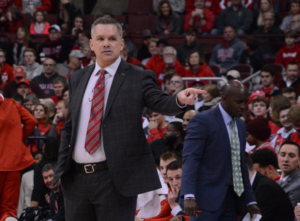 Ohio State head coach Chris Holtmann did not like the way Mark Turgeon, Maryland’s head coach, characterized the play of Buckeye big man Kaleb Wesson and then continued to drag on about it to the media. So, he responded.

Following Ohio State’s 79-72 victory against Maryland at home on Sunday, Feb. 23, Turgeon complained about Wesson’s physicality, primarily in reference to the matchup between him and Maryland sophomore forward Jalen Smith.

“He was allowed to be the bully offensively today,” Turgeon said of Wesson in the postgame presser Feb. 23. “I mean, he stuck a forearm right in (Smith’s) chest twice. I guess you’re allowed to do that here in this building.”

During his turn at the podium, Holtmann was informed of Turgeon’s reference to Wesson as a “bully” in the matchup.

“He was described as being a bully?” Holtmann asked the reporter who posed the question. “Oh. Mark said that? To each his own. His opinion can be his opinion. I thought Kaleb was physical and well within the rules and played hard and played tough and played physical.

“Listen, that kid’s gotten pushed and shoved and the number of time people have flopped on his throughout this year… he played well within the rules, as he should have, today. Kudos to him for that, because that can be frustrating.”

Turgeon continued his complaints about the Wesson-Smith matchup on Feb. 25 while speaking with local reporters in Maryland.

“Complaining [in any official capacity] is a waste of time for me,” Turgeon said according to The Washington Post’s Maryland writer Emily Giambalvo. “It doesn’t do me any good. But it was really like the big brother picking on the little brother, and the parents were just letting him do it.”

Turgeon carried on, again calling Wesson a “bully” while on the podcast Courtside with Greenberg & Dakich, which is hosted by Seth Greenberg and Dan Dakich.

“I have a ton of respect for Mark and the Maryland team and the Maryland program, but I just continue to take issue with the way he characterized Kaleb’s play,” Holtmann said. “It’s inappropriate. I’ve never seen this much conversation after a loss. And I understand there’s probably some maneuvering in terms of the next game that they play, but no one is scrutinized in terms of officiating more than Kaleb Wesson, and he’s had to adjust.”

“When we played in College Park (Md.), they flopped a couple of times and it was called and we shot a technical free throw on it. And we showed that that could be the case again. He has got his fair share of calls against him. He’s adjusted. He’s scrutinized as much as anybody in this league when it comes to officiating and he’s had to adjust. And he’s going to have to continue to adjust and I thought that those comments afterward were quite honestly a little bit out of place.”

Holtmann said that Wesson deserves credit for how he has adjusted his game to avoid the serious foul trouble that plagued him as an underclassman.

“We’re certainly moving on, but it was hard to let that one rest,” Holtmann added.