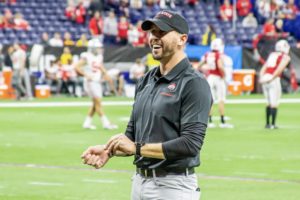 Ohio State has marked its dominance early on in the 2021 football recruiting class, holding the No. 1 class in the country by a sizable margin over second-place Clemson.

Because of this, five different Ohio State coaches are ranked in the top nine among recruiters for the 2021 class. The next closest program is Florida, who has five coaches in the top 40.

As wide receivers coach, Hartline has helped earn two commitments from wide outs in four stars Marvin Harrison and Jayden Ballard. But Hartline has not stopped at his own position, helping to get the commitments of five-star quarterback Kyle McCord and cornerback Jakailin Johnson.

All four of Hartline’s commits are ranked in the top 72 for the 247Sports Composite Rankings, and his 97.52 average commit ranking is No. 5 among recruiters with multiple commits.

Ohio State’s running backs coach had a bit of a difficult 2020 recruiting cycle, losing out on five-star Bijan Robinson and four-star Jaylan Knighton, both of which seemed like they were ready to come to Columbus.

To start this 2021 cycle, Alford has regained momentum, helping seal two commits outside of the running back position in four-star offensive tackle Ben Christman and three-star tight end Sam Hart, before getting four-star running back Evan Pryor on March 16.

Alford then followed that up with a commitment from four-star safety Andre Turrentine, giving him a 93.49 average rating between the four commits.

He has only been at Ohio State since mid-January, but Coombs has wasted no time getting back on the recruiting trail.

The defensive coordinator and secondary coach has helped earn three commits thus far, two of which are the aforementioned Johnson and Turrentine. Coombs also picked up a commitment from three-star cornerback Devonta Smith, further deepening his secondary of the future.

Coombs’ return has been a welcome one for the Buckeyes, even without playing a single game, and the No. 4 ranking among all recruiters in the country is proof of that.

Johnson, Ohio State’s associate head coach and defensive line coach, only has two commitments under his belt for the 2021 cycle, and he still finds himself ranked No. 8 among all recruiters.

That is because of who the two commits are: five-star defensive end Jack Sawyer and four-star defensive tackle Mike Hall, two players ranked in the top 100.

Sawyer is the third-highest ranked recruit for the 2021 class, and Hall ranks in at No. 93, while being the eighth best at his position.

The combination gives Johnson a 97.99 average recruit ranking, No. 3 in the country among recruiters and the highest among any recruiter with multiple commits.

Washington rounds out the Ohio State recruiters in the top 10, coming in at No. 9 thanks to his help in earning a trio of commitments.