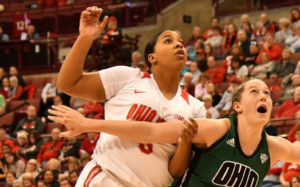 One of the seven members of Ohio State’s coveted 2019 class will be headed elsewhere.

Freshman guard Kaelynn Satterfield has entered the transfer portal and “will leave the Ohio State Women’s Basketball program,” according to the press release.

“I appreciate Kae’s time and contributions this year,” head coach Kevin McGuff said in the release. “I wish her nothing but great success moving forward.”

Satterfield has seen action in 18 games, and has averaged 2.4 points and 1.8 rebounds per contest, shooting 37.2 percent from the field in limited time.

That limited time has led to a team-low 8.1 minutes per game.

Satterfield was one of three players, along with freshman guard Kierstan Bell and sophomore guard Janai Crooms, to face a one-game suspension earlier this season against Sacramento State, though the details of the suspension were never specified.

Satterfield was a four-star prospect out of Christ the King High School in New York, and was the No. 16 guard and No. 88 overall recruit in her class, according to ESPN.