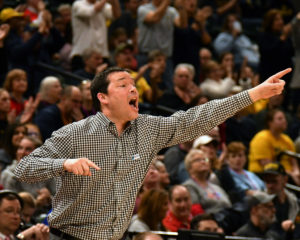 For Ohio State to have made it all the way to the Big Ten tournament championship game as a six seed is impressive in its own right.

But for the Buckeyes to take it one step further and win the whole thing would be more impressive than the first three tournament victories combined.

They will be facing off against the one seed in Maryland, a powerhouse group that has won its past 16 games, nine of which were by 20 points or more.

“They’re a really good team, they’re but one of the best defensive teams we played this year,” head coach Kevin McGuff said following the 66-60 win over Michigan on Saturday. “I thought tonight some of our issues, we were kind of lethargic on offense, we didn’t move ourselves and the ball enough, and we’re going to have to be much better with that tomorrow.”

Ohio State faced off against Maryland twice this season, and while both were losses, they came in very different ways.

The second matchup was an outcome the Terrapins were used to seeing: an 85-65 win on Jan. 30 that was pretty much over by halftime. But on Jan. 6, Ohio State was in the driver’s seat to pull off a major upset on the road against what would end up being the top team in the Big Ten.

The Buckeyes led Maryland 42-35 at halftime, helped by committing just one first quarter turnover to a team that forced an average of 22.5 turnovers per game on the season. It was also helped by a 12-1 second quarter run that had Ohio State up by 11 before the Terrapins began to slow the team down.

By the end of the third quarter, a seven-point Ohio State lead turned into a two-point Maryland lead, and the Terrapins ultimately won the game 72-62. Maryland senior forward Kaila Charles finished with 28 points, seven rebounds and four steals on 13-of-19 shooting.

After committing just a single turnover in the first quarter, the Buckeyes committed 24 over the next three quarters.

“We had them in the first game,” junior guard Braxtin Miller said. “Second game it got a little tough, but I think that it gives us a lot of great perspective on what we need to do and the type of team they are, and the things that we can do in order to increase our chances of winning. So we just have to make sure that we’re really locked in and focused on the tasks we have.”

Maryland’s defense, which as a group averaged just 56.7 points per game allowed on 36.6 percent shooting, is just half of the problem with facing the No. 6 team in the country.

It also has an offense that averages 82.8 points per game, most in the Big Ten. Five Terrapins average 11 points per game or more, and they are spearheaded by a national player of the year finalist in Charles. She averages 14.5 points per game and 7.4 rebounds per game while shooting 50.4 percent from the field.

Not far behind her are sophomore forward Shakira Austin (11.9 PPG) and freshman guard Ashley Owusu (11.8 PPG). Austin is second to Charles with 6.8 boards per contest, while Owusu, the Big Ten Freshman of the Year, is tops on the team with 5.3 assists per game.

If the talent wasn’t enough, Maryland may come in with a chip on its shoulder after last year’s Big Ten tournament, where the Terrapins again came in as the top seed, but feel in the championship game 90-76 to No. 2 Iowa.

“It’s going to be a tough game. Obviously they came to win last year, they didn’t win it. So they’re definitely coming for it this year,” sophomore forward Dorka Juhasz said. “But hey, this is our first time here in the championship game with this team, so we’re ready too.”

“Just like tonight, it’s gonna be a fight,” sophomore forward Aaliyah Patty said after the Michigan win. “We have to come out ready to play for the whole 40 minutes.”

No. 6 Ohio State battles with No. 1 Maryland for the Big Ten tournament title at 6 p.m. Sunday. The game can be watched on ESPN2.