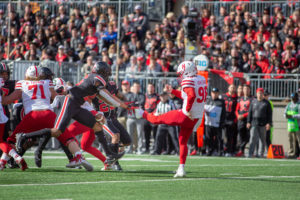 Ohio State Game At Nebraska Will Be Under The Lights

The Sept. 28 showdown with the Cornhuskers will represent the first night game of the 2019 season for the Buckeyes, who have three straight games scheduled under the lights:

The streak of under-the-lights affairs begins after three noon kickoffs and a 3:30 p.m. start against Miami (Ohio) on Sept. 21.

The matchup between the Buckeyes and Huskers was expected to be one of the biggest of the season after the way Nebraska fought in Columbus a year ago. Ohio State squeezed out a tight victory at home against the Huskers in 2018, overcoming a halftime deficit to win, 36-30. Nebraska then-freshman quarterback Adrian Martinez completed 22-of-33 passes for 266 yards and one touchdown, along with 72 rushing yards on 20 totes and two TDs.

However, the Huskers have struggled in their 2-1 start, losing to unranked Colorado, 34-31 in their second game. Nebraska rolled North Illinois of the MAC, 44-8, on Sept. 14 and will travel to Illinois for a Big Ten West matchup Sept. 28.