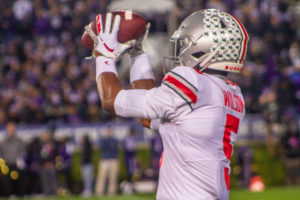 The Buckeyes have fired out of the gates to a 7-0 start, with several true freshmen making immediate contributions.

The aforementioned freshmen have all played in at least five games this season, making them ineligible for a redshirt. Some of their fellow 2019 classmates are on the brink of that five-game cutoff, and head coach Ryan Day gave his perspective on the redshirt situation.

“I think when you say we’re going to redshirt this person, they almost start to lose hope a little bit,” Day said. “It’s like: ‘OK, I guess I’m not playing this year.’ So, we don’t like to do that. However, with this new four-game rule, it allows the opportunity to get these guys on the field to figure out can they help us this year. And if they can, we want to play them. If they can’t, then usually typically we’ll kind of hold off and wait until it’s an emergency situation or until we need them at that point in the game.

“But we certainly would not tell somebody at this point of the year, ‘Hey, you’re redshirting for the year.’ We just don’t know. Here are the games you’ve played; if we put you back in a game, it’s because you can really help us win a game or two or three, and then we’ll kind of just make the decisions as they come up.”

Offensive tackle Dawand Jones, who has been used on field-goal block, has only played in three games, but at 6-foot-8, 360 pounds, he is not the typical freshman. Day was asked about the possibility of needing Jones’ skillset for more than four appearances.

“He’ll probably go more than four just because he is very talented,” Day said of Jones. “We want to get him in some of these games when we can. His ceiling is very high. We want his development to continue.

“I really think it’s important for these guys to play. Again, we won’t be foolish with this and waste the year. At the same time the more these guys can play, I think you saw that in the first quarter, on both sides of the ball, guys were into it, we were playing hard, competing.

“That goes back to six or seven games of guys playing, being on film, getting better, having that hope they are going to play in a game as opposed to going through six or seven games without ever actually getting on the field. That can kind of stunt people’s development.

“We’re going to play him, if it makes sense. We also don’t want to be foolish.”

In addition to Jones, running back Steele Chambers, defensive end Noah Potter and linebacker Cade Stover have played in just three games, giving them one more before reaching the four-game limit to maintain redshirt eligibility. Once the student-athletes reach four games, a decision must be made. They can play in up to four games, but if they play five, then they cannot redshirt.

Day was asked about Chambers and Stover, specifically, regarding the possibility of redshirting them as freshmen.

“Same thing, we’ll look at the game plan and see if it makes sense to get them in there to help us win,” Day said of Chambers and Stover. “If that’s the case, well definitely do that. We don’t just want to put guys in there and take a bunch of reps that will be a waste of a season.”

It remains unclear who all will end up taking a redshirt this season and who will play in more than four games, but Buckeye Sports Bulletin will continue to track the progress of Ohio State’s true freshmen throughout the season.

Safety Ronnie Hickman has been sidelined with injury all season, while tight end Cormontae Hamilton and offensive linemen Enokk Vimahi and Ryan Jacoby have also not yet played in a game.