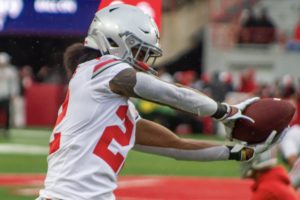 A favorable matchup with Rutgers allowed Ohio State to play many of its reserve players, including numerous true freshmen, in its 56-21 victory.

Chambers played in his fourth game of the season, and with NCAA redshirt rules allowing players to take part in four games and still redshirt, it is likely the Buckeyes were saving Chambers for this occasion. The Roswell (Ga.) Blessed Trinity product ran for 56 yards on nine carries (6.2 yards per carry) against a Rutgers defense that knew he was getting the ball on nearly most snaps.

Stover made the transition from linebacker and got his first game experience at defensive end, playing in his fourth game. Fellow freshman defensive end Noah Potter has already played in four games and will likely redshirt, seeing as how he did not travel to Piscataway, N.J.

The standout among the freshman defensive ends, Zach Harrison, worked with the No. 1 defense against the Scarlet Knights and recorded three tackles (one solo) and put pressure on Rutgers quarterback redshirt freshman Johnny Langan.

Freshman wideouts Garrett Wilson and Jameson Williams struggled against Rutgers, but they will likely play important roles for the Buckeyes down the stretch. Wilson muffed a punt and snagged one pass for 13 yards, while Williams was unable to haul in a couple of catchable passes.

Along the Scarlet and Gray offensive line, Harry Miller, Jones and Vimahi all played extensive snaps in relief of the veterans. Although there were penalties and the offense struggled to move the ball, the freshman O-linemen gained valuable game experience.

Safety Bryson Shaw did not play on defense, but made an impact on special teams, recording his first career tackle.

Playing for the first time since the game against Miami (Ohio), Eichenberg, a linebacker, saw the field for two snaps in the third quarter and then four on the Scarlet Knights’ final drive.

Running back Marcus Crowley suffered an unspecified injury against Maryland and did not travel with the team to Piscataway.

While Crowley, Harrison, Jones, Miller, Williams, Wilson and Young are ineligible for redshirts, having played in at least five games, Chambers, Potter and Stover have played in four and would have to burn their redshirts if they play in another game.

A previous edition of this story said Harrison started against Rutgers, but Tyler Friday and Javontae Jean-Baptiste took the first snaps.