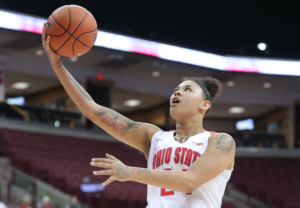 Kierstan Bell, an Ohio State women’s basketball standout, had to make the transition from Ohio’s only three-time Ms. Basketball winner to a freshman on a transitioning Buckeye squad.

Bell, who goes by the moniker ‘Dot’ or @Dotmug_330 on Twitter, set 75 school records at Canton McKinley as a high-school star. While many hoopers stand out in high school, college basketball is another world. Bell continues to shine, however.

“Nothing has really surprised me,” Bell said. “It’s just basketball.”

Bell is second on the Buckeyes in scoring (11.1 points per game) and steals (1.4), while her 4.6 rebounds per game lead Ohio State’s guards.

Ohio State is 17-9 overall and 10-5 in the Big Ten, which are both impressive marks considering the team’s lone upperclassman is a junior transfer and there are six freshmen in important roles.

A large reason for the Buckeyes’ success is not only the play of Bell, but her leadership on and off the floor. Bell explained that everybody on the team has different roles, and while sophomore forward Dorka Juhasz’s role is rebounding, sophomore guard Janai Crooms and Bell focus on energy.

“Janai and I have to worry about our energy,” Bell said. “Because if we’re not energized, they’re looking at us like, ‘Oh they’re not energized.’ But we just got to stay consistent with our energy and make sure that everybody is ready to go.”

Bell will act ‘goofy’ to lift up her teammates’ energy, or serious when it’s time to lock in. McGuff appreciates the positive effects that Bell’s high energy has brought to the young Buckeyes.

“When she’s bringing that energy, it’s contagious,” McGuff said of Bell. “It’s really important for us that she does that consistently.”

Like many of her talented first-year teammates, Bell is playing significantly less minutes than she did when she became the only Ohio Ms./Mr. Basketball three-time winner since LeBron James. The former high-school phenom kept a steady head through all the ups and downs of her first few months of college ball.

“Just staying positive,” Bell said. “You can’t really dwell on it, you can’t get down on yourself. You got to keep working, getting in the gym, and hopefully it’ll flow into the game.”

Bell’s hard work and selfless approach paid off when she won back-to-back Big Ten Freshman of the Week awards in January, giving her three on the season. The last accolade garnered praise from fellow 330 native and Portland Trail Blazers guard C.J. McCollum, who refers to Bell as ‘Young legend.’

“It means a lot for real, coming from an NBA player, and he’s been there,” Bell said of McCollum, who she worked with at his basketball camp in Canton. “And showing love, that’s just respect.”

McGuff has been thoroughly pleased with the progress Bell has made in her first season in Columbus, but it’s clear the seven-year Ohio State coach knows the best of Bell is yet to come.

“Certainly her best years are way ahead of her, but she’s showing what she’s capable of doing,” McGuff said. “It’s a matter of just continuing to get better and comfortable in our system and be consistent with it.”

The Scarlet and Gray conclude their practices with foul shots, and like many teams, their performance determines if they have to run sprints and how much they have to run. Many student-athletes, particularly freshmen, might shy away from the immense pressure that comes with shooting last. Bell embraces it.

“I always go last in the free-throw game,” Bell said. “If it comes down to the last performer – you got to be clutch. Never fold under pressure.”