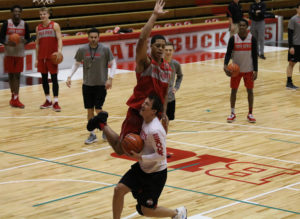 A team spokesperson confirmed the development after several outlets on the beat reported the news. Through Ohio State, Holtmann issued a statement.

“Jaedon is a terrific young man,” Holtmann said. “We appreciate the contribution he made to our team and wish him the best going forward.”

Entering the portal does not guarantee that a player will transfer, but it does mean other schools can contact LeDee regarding a potential move.

The Buckeyes are set to return eight scholarship players. Holtmann also received letters of intent from three players already in the 2019 class, which ranks No. 1 in the Big Ten.