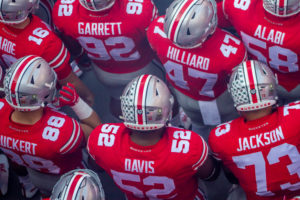 The near three-month-long absence from workouts at the WHAC was due to COVID-19, which halted spring practices for the Buckeyes, as well as every team nationwide, forcing players and coaches to figure out at-home workouts for the team.

Players were allowed to practice as early as 6;30 a.m., and the voluntary workouts for the football team were scheduled to continue until 3:30 p.m., with as many as nine players being allowed to workout in one specific location at the same time in order to maintain social distancing. Since the WHAC has four workout locations, up to 36 Ohio State players were allowed at the same time.

Coaches were not allowed to observe these workouts because they are voluntary.

In order to practice in the first place, each player was required to be tested for COVID-19 and then stay in quarantine for 24-48 hours, or until the test results were available. The players were also seen in face masks and had to watch an online video walkthrough of the facility.

These voluntary workouts are underway with just less than three months until Ohio State’s first game of the 2020 season, which is scheduled for Sept. 5 against Bowling Green.