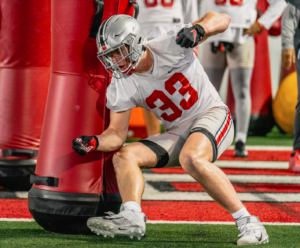 Ohio State defensive end Jack Sawyer became one of the first freshman to lose his black stripe, shedding it on Tuesday along with wide receiver Marvin Harrison.

“I just want to thank all the coaches, all the older guys for accepting me when I came in here,” Sawyer said in the video. “Happy to be a part of the brotherhood, go Bucks.”

Sawyer came to Ohio State as a five-star defensive end out of Pickerington (Ohio) North and was ranked as the No. 4 overall recruit in the 2021 class. He committed to the Buckeyes on Feb. 3, 2019, the first of any prospect in Ohio State’s class.

“Physically put-together prospect. Has taken weight and speed training seriously and that shows up. Likely will not add tons and tons of weight come college, but still has a little bit of room,” Trieu wrote on Sawyer. “Great athlete who is a multi-sport guy and a multi-positional guy on the football field including even some stints at quarterback. As an end, that athleticism shows up as he gets off the ball well and can bend the corner and get upfield. Also is strong enough to anchor in against the run and has the blue-collar mentality to work in the trenches. Can run plays down when they go away from him and pursues hard.

“True strong-side end with enough versatility to play in multiple fronts or schemes. High-level prospect who is ready to come in and compete as a freshman at the college level and has the traits of a future high draft choice.”

Sawyer was the second defensive player to lose their black stripe in spring practice, with the first being redshirt freshman defensive lineman Jacolbe Cowan, who sat out last season due to injury.