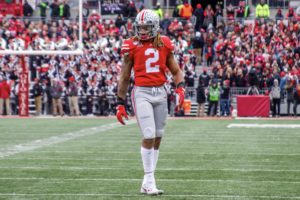 Young is the sixth Buckeye to win the award in eight years and Ohio State winner No. 19 overall.

The nation’s sack leader totaled 19 points with nine first-place votes and one second-place selection from the 14 Big Ten coaches, who could not vote for their own players.

He is the first defensive player to win the award outright since Michigan’s Charles Woodson in 1997. Michigan defensive end Brandon Graham shared the honor in 2009 with Penn State quarterback Daryll Clark.

Despite missing two games due to suspension, Young is first in the country with 16.5 sacks lead the nation. He is sixth in tackles for loss with 19.5 and his 1.95 TFL per game leads the country as well.

“It’s hard to forecast this, because he is the best player in college football,” former Ohio State coach Urban Meyer, who recruited Young, told the Tribune.