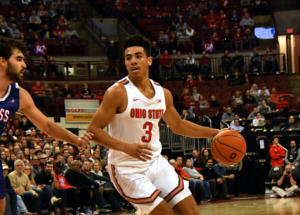 Ohio State struggled once again out the gate, but bounced back and beat UMass Lowell, 76-56, at Value City Arena on Nov. 10.

Head coach Chris Holtmann was proud of Wesson’s success as a distributor in the win and referred to his contributions as “so important.”

“It’s a good luxury to have,” Holtmann said of Wesson’s playmaking. “We’ve worked a lot on post traps. He was disappointed with his overall numbers. They didn’t have the size we’re going to see in post-trap situations, but it was good to see. I like his demeanor and approach right now. I think it’s in a really good place.”

The Buckeyes went 3:29 without scoring a point to start the game, trailing the River Hawks, 6-0, before junior guard C.J. Walker got the home team on the board with a layup. Ohio State quickly took the lead with a three-pointer from Wesson and a bucket from Muhammad.

“At first, we were just playing a little too ahead of ourselves, not really following the game plan that Coach put in for us,” Carton said of the slow start. “Once we got back, came together as a team and started going through the game plan, baskets started coming easier for us.”

The Buckeyes did a good job of navigating into the paint and drawing fouls early on, but making the free throws was a different story. Ohio State missed their first seven free throws and failed to connect at the charity stripe until there was 9:37 left in the half, when Wesson knocked down a pair.

UMass Lowell battled the Buckeyes tough through 10:40, trailing just 18-15. The Scarlet and Gray ripped off a 13-4 run with a three-pointer from Duane Washington, a dunk and another set of foul shots by Wesson and three layups by different freshmen: Carton, E.J. Liddell and Alonzo Gaffney, marking the Cleveland native’s first collegiate basket. Gaffney finished with 10 points and eight boards.

At the halftime intermission, the Buckeyes led the River Hawks, 38-25.

After a pair of free throws from Obadiah Noel cut the Buckeyes’ lead to 38-27, the home squad rallied on a 12-3 run to push the lead to 20, with six points from Kyle Young and capped by back-to-back triples by Muhammad and Washington.

Following that hot streak, Ohio State continued to roll on its way to victory. The big lead allowed Holtmann to give more minutes to his true freshmen, including Ibrahima Diallo, who made his collegiate debut and grabbed two rebounds. Walk-ons Danny Hummer and Harrison Hookfin both saw four minutes of action as well.

Overall, the Buckeyes shot poorly from the free throw line (11 of 22), but found their range from beyond the arc, nailing 9 of 23 tries from deep.