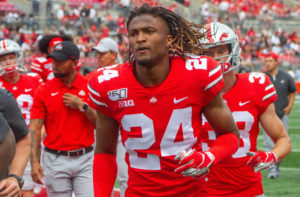 After electing to return for his junior season, Ohio State cornerback Shaun Wade has already found himself in some awards talk with three months to go until the regular season is scheduled to begin.

Wade was one of 42 players nationwide to be named to the Lott IMPACT Trophy watchlist, an award that goes out to the defensive player that shows the most IMPACT, which stands for Integrity, Maturity, Performance, Academics, Community and Tenacity.

The award, which started in 2004, prides itself on being the only one of its kind that considers the character of the nominees when selecting a winner. Linebacker James Laurinaitis, who won the trophy in 2008, is the only Buckeye to ever win the award.

In his sophomore campaign, Wade finished with 25 tackles, four tackles for loss, a pair of sacks, an interception, a forced fumble and eight pass breakups. He is now the only returning starter from Ohio State’s 2019 secondary, a secondary that allowed the fewest passing yards per game (156.0 yards) in the country.