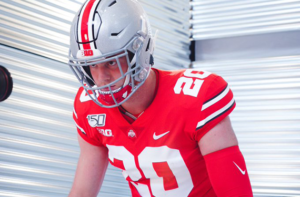 The linebacker unit was the one that often got the fingers pointed at it, with numerous big plays coming through the middle of the field while linebackers were pushed too far up in the play, out of position

New co-defensive coordinator Greg Mattison has heard this before. But when looking at the unit he is working with in his first year at Ohio State, the stats don’t matter to him at all.

“Stats are stats. You know, the only stat that I ever really look, really, really close at, are points, you know, giving up points,” Mattison said. “That’s the bottom line. I didn’t even look at what it was last year. Doesn’t matter to me.”

Mattison is loving what he has seen from his linebackers through training camp, especially from two of the returning starters: junior Pete Werner and redshirt junior Tuf Borland.

When asked about Werner, Mattison had nothing but positives to say.

“I really believe he is a top guy at his position. I’ve had the opportunity to see a lot of pretty good football players and I am really impressed with him,” Mattison said. “He plays extremely hard. He’s very physical. He’s got great size and strength and he can run and he’s got unbelievable character.”

When it comes to Borland, there are many of the same, extremely positive thoughts.

“I like everything about Tuf Borland’s game,” he said. “Borland is another one that comes out to practice every day, extremely intelligent. Takes great pride in getting the front lined up.”

While Mattison would not lock anything up as far as who would be starting on the depth chart, it seems that he is thrilled about whoever will eventually be out with the first team.

Following a rough defensive season — one where the linebackers particularly were critiqued — maybe a coordinator who doesn’t prioritize stats is exactly what the unit needs.

For more on the linebacker unit, check out the full story in the season preview print edition. Sign up for a subscription here.