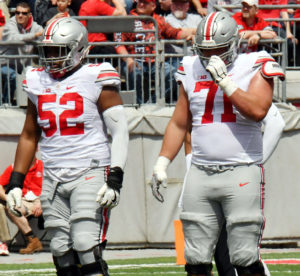 Ohio State redshirt sophomore center Josh Myers found himself in a unique position this spring as he attempted to solidify his role as a starter while also acting as a leader for younger players aiming to take his spot — particularly incoming freshman Harry Miller, who was considered a five-star prospect and the nation’s top-rated center in the 2019 recruiting cycle.

Myers — who started his career at tackle and has since found a home at center — will play a significant role on an offensive line breaking in four new starters this fall. And seeing as the staff considered playing him late last year and moving All-American Michael Jordan to left guard, there shouldn’t be much drop off at the position … if any.

“Josh Myers is having a heck of a spring,” said offensive line coach Greg Studrawa. “He’s definitely taken charge. He’s been doing great. He’s been strong with his calls and really confident.”

Though he admits he initially struggled with the move to center because of the calls he’s required to make and the overall speed at which he must make them, Myers has settled into the position this spring. Through more and more repetitions, things finally started to slow down.

“I really had no choice but to be confident or else the other guys would question my calls. So honestly, just being a center went a long way with my own confidence because you have no choice but to be confident,” Myers said. “I just love it. It’s mean. It’s in your face. A 320-pound defensive tackle is five inches from you and trying to jump the snap. I don’t know. It’s just fun. I love it.”