Ohio State Battles Back But Falls 61-57 To Wisconsin 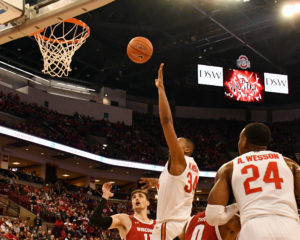 The Ohio State men’s basketball team fell to Wisconsin 61-57 in front of a sellout crowd at Value City Arena on Jan. 3.

Junior big man Kaleb Wesson led the way for the Scarlet and Gray with 22 points and 13 rebounds on 7-of-10 shooting and hitting 7 of 9 free throws.

Head coach Chris Holtmann was asked about the team’s inability to play well offensively outside of Wesson.

“OK, spotty at times,” Holtmann said. “I’m concerned about our turnovers, our passing, which was again an issue, but confident we got guys that can step up and not be so reliant on Kaleb. But he generated a lot on offense tonight.”

After a shaky first half, Ohio State found its groove in the second half. The Buckeyes opened the second frame on a 13-2 run, sparked by triples from sophomore guard Duane Washington and senior wing Andre Wesson.

The rally gave the Scarlet and Gray a seven-point lead, but the visitors did not go away, taking a 52-51 lead and extending that edge to 55-51 with 1:08 left.

Washington kept the Buckeyes alive with a three-pointer to cut the Badger lead to one with 57 seconds remaining. Wisconsin was able to hold off Ohio State in the end, however, hitting all six of its free throws before Washington hit a triple at the buzzer.

“We’ve got to get back in the gym and practice these situations,” Kaleb Wesson said. “Things like this come down to preparation and older guys keeping poise and everything like that. I feel like tonight they took us out of some of our stuff and credit to them, they’re a good team.”

Kaleb Wesson began the game with seven unanswered points, including an and-1 and strong left-handed finish over former Buckeye big man Micah Potter.

Once the Buckeyes pushed their lead to 9-2, the Badgers responded with a 7-0 run of their own, highlighted by four points from Potter, including a smooth right-handed hook shot.

Ohio State took a 15-9 lead but gave it up on back-to-back Badger three-pointers. After the game was tied at 15, the Buckeyes and Badgers battled back and forth with the home team leading 25-21 with 1:33 until halftime. Then, the visitors knocked down consecutive shots from beyond the arc to cap off an 8-0 run and take a 29-25 lead into halftime.

Washington re-entered the starting lineup in junior forward Kyle Young’s (appendix) absence. The second-year guard out of Los Angeles Sierra Canyon struggled mightily, shooting just 2 of 10 in the first half. Despite the rough start, Washington finished with 18 points on 6-of-19 shooting, including 4 of 10 from deep.

Holtmann was asked about how the team filled in for Young, who remains game to game.

“Given the fact that (freshman forward Tyler Wahl) had five offensive rebounds and we had trouble matching up with him, I’m sure he would have helped,” Holtmann said of Young. “But listen, we’ve got good enough players to limit that, and we’ve got to coach them to be better and play better.”

The Buckeyes struggled offensively against the Badgers in the first half, shooting just 36 percent from the field and 10 percent from three-point range. Their defense kept them in the game, though, holding Wisconsin to just 38.5 percent shooting through the first 20 minutes.

Potter finished with four points and three rebounds in 11 minutes for Wisconsin, while junior forward Nate Reuvers led the team with 17 points and nine boards on 3-of-12 shooting and 10 of 12 from the charity stripe.

A noticeably distressed Holtmann was asked about dropping consecutive losses to West Virginia and Wisconsin and where the Buckeyes need to do to get back on track.

“Two good teams, league play. It’s incumbent upon us as coaches and players to figure it out and get better with it,” Holtmann said. “Obviously, nobody likes this feeling.”

For four free issues of the weekly print edition of Buckeye Sports Bulletin, no card required, sign up at the link here: