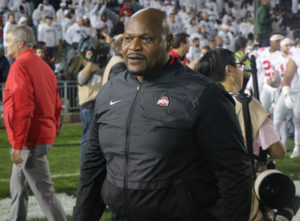 According to Yahoo Sports’ Dan Wetzel, Blazer told the court a former assistant coach encouraged him to pay $10,000 to former Nittany Lions defensive end Aaron Maybin (2006-08) with hopes he’d return to school for another year.

“The coach wanted the player to consider staying,” Blazer testified. “The player was leaning on coming out. The coach, in an effort to convince the player to stay in school, set up a meeting with me and the player’s dad.”

Maybin was selected by the Buffalo Bills with the 11th overall pick in the 2009 NFL Draft.

Blazer did not specifically name Ohio State associate head coach/defensive line coach Larry Johnson, but said the coach-in-question’s son was an NFL player and one of his many clients.

Larry Johnson Jr. starred at Penn State and played in the NFL for nine years with the Kansas City Chiefs, Cincinnati Bengals, Washington Redskins and Miami Dolphins, and his father is the only person on Nittany Lions’ staff at that time who meets that description.

“That is not accurate at all,” Johnson — who is entering his sixth season at Ohio State and was promoted to associate head coach in January — told Wetzel. “That is absolutely false. I would never, ever ask anybody to do that. That is not me.

“Why is it that something like that comes out and nobody says anything to me? This is the first call I’ve gotten. All of a sudden this Marty Blazer guy can just say whatever he wants? That is absolutely amazing. Wow.”

According to Wetzel, the allegation is “highly unlikely” to attract the attention of the NCAA, even with Johnson still coaching at Ohio State. Johnson served as an assistant coach at Penn State from 1996-2013 and joined the Buckeyes’ staff in 2014.