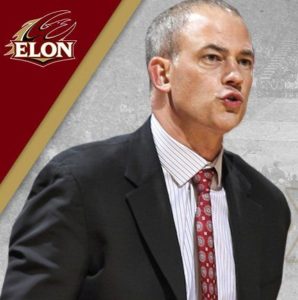 A big welcome to Mike Schrage, the 18th head coach in @ElonMBasketball history!

“We are thrilled to welcome Mike, his wife Amanda, and their children Andrew and Sophia to the Elon family,” Blank said in a statement. “Mike has learned under some of the game’s best coaches in Bob Knight, Mike Krzyzewski, Johnny Dawkins and Chris Holtmann throughout his career. He has helped lead teams from every program he’s worked with to the NCAA Tournament, which includes multiple Sweet 16s and a win in the national championship game. His deep recruiting ties to North Carolina and beyond, his success at academically-rigorous institutions and his commitment to the total student-athlete experience makes us excited to have him as the leader of our men’s basketball program.”

The 43-year-old Schrage spent the last three seasons (two at Ohio State and one at Butler) as an assistant under head coach Chris Holtmann. He helped the Buckeyes to back-to-back appearances in the NCAA Tournament and was instrumental and in helping the program achieve the Big Ten’s best recruiting class in 2019.

“I am honored to be named the 18th head men’s basketball coach at Elon University,” Schrage stated. “It has been a dream of mine for a long time to lead a program, and I appreciate President (Constance “Connie” Ledoux) Book and Mr. Blank affording me the opportunity at such a great institution. The commitment to athletics that Elon is making is impressive and the future is very bright. Elon is a great fit for me and my family, and we can’t wait to build great relationships with our student-athletes and the Elon community.”

Schrage will be officially introduced as head coach on Monday. He becomes the first assistant to leave Holtmann’s staff since his arrival two seasons ago.

“We are so happy for Mike and his family,” Holtmann said. “The Elon community will love Mike, Amanda, Andrew and Sophie. Mike has earned this tremendous opportunity, and it’s a fantastic hire by Elon. The Ohio State basketball family sends its congrats to Elon University and the Schrage family.”