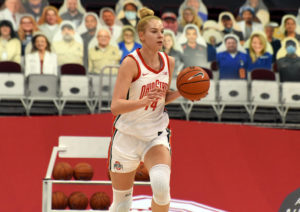 Junior forward Dorka Juhasz announced on Twitter Saturday that she will be entering the transfer portal with two years of eligibility remaining.

“This year has been full of ups and downs. I have faced many challenges that required an immense amount of faith and persistence,” Juhasz wrote in the tweet. “Our basketball season was cut short this year. As a basketball player, a postseason ban is one of the most difficult and disappointing things that can happen. Not being able to play in the tournaments and compete for the championships definitely left emptiness and sadness in my heart. Nevertheless, I’m proud of how my team and I handled the situation.

“Fulfilling my lifelong dreams both in basketball and in my education is still the number one priority for me. With that being said, after careful consideration and discussion with my family, I have decided to enter the transfer portal with two years of eligibility remaining.”

Juhasz leaves Ohio State after her second straight season on the First-Team All-Big Ten team. This past year, the 6-4 forward out of Pecs, Hungary finished with 14.6 points and 11.1 rebounds per game. That rebound total was second in the Big Ten to Michigan’s Naz Hillmon.

The decision to transfer leaves Ohio State short at the forward position, with Gabby Hutcherson, Rebeka Mikulasikova and Aaliyah Patty being the only forwards remaining on the roster. Tanaya Beacham, who transferred over from Toledo to play for the Buckeyes in 2020-21, was a senior, but has not yet announced if she will be using her free year of eligibility to return to Ohio State next season.