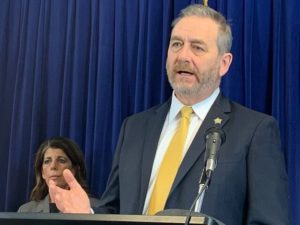 Ohio attorney general Dave Yost told The Columbus Dispatch on Wednesday he is ready to recommend Ohio State file a lawsuit against the Big Ten and its member schools that voted against a fall football season, saying the conference lacked the legal authority to cancel or postpone.

“I think we have a cause of action,” Yost said. “If these negotiations (over playing football) fall apart, we will be recommending legal action to our client, Ohio State University. (The university has an) excellent contract claim for several tens of millions of dollars in lost revenue.”

And the universities who are standing in the way could be defendants as well.

If Michigan, for example, thinks COVID warrants cancellation of the season, fine. Opt out.

But then get out of the way — or Ohio State’s losses could become yours. https://t.co/D0n6ltyec5

Big Ten presidents and chancellors overwhelmingly voted last month to postpone fall sports, with Iowa, Nebraska and Ohio State as the lone dissenters. Parents at those three programs have protested the decision in the meantime, calling for the conference to reconsider.

While conference commissioner Kevin Warren initally said the decision would not be revisited, the Big Ten is reportedly exploring a number of options for returning to play. No vote is expected until this weekend at the earliest, according to the Chicago Tribune’s Teddy Greenstein.