Observations On Ohio State’s Defense From Practice No. 11 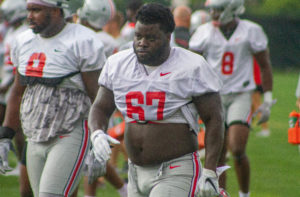 Through the first six periods of Ohio State’s practice that the media was allowed to view, there was not much as far as new information.

It appeared Malik Harrison, Tuf Borland and Pete Warner were the linebackers in the first-team drills.

“There’s good depth there. Guys are practicing hard at linebacker. Proud of the way those guys are running around and they are trying to really practice tough,” head coach Ryan Day said. “That’s been a huge emphasis pulling on defenses to be the toughest defense in the country and toughest defense in the Big Ten. I think they are practicing that way. I think the young guys are flashing.”

At defensive tackle, it appears to be Davon Hamilton and Jashon Cornell lining up first, with Chase Young and Jonathon Cooper up first at defensive end.

From viewing the defensive line, you can see just how valuable coach Larry Johnson is to that unit. When watching him do what he does best, talking the players into the proper technique and footwork, it makes sense he was the only defensive position coach to keep his job between Urban Meyer and Ryan Day.

Defensive end Chase Young and defensive tackle Davon Hamilton were often at the front of the drills for the defensive line. Defensive end Haskell Garrett was often highlighted by the coaches as a strong suit in the drills.

Co-defensive coordinator Greg Mattison said, regardless for how much Young has impressed, he hopes to see the junior get matched up against two or more on the offensive side.

“Chase Young is an outstanding person, athlete and football player,” Mattison said. “And as far as triple-teaming him, good luck, because you’ve got Cooper, you’ve got some other guys right there; that means they are singled, and that’s the beautiful thing in our package and what I’m excited about is you don’t just have one.”

Linebacker Teradja Mitchell returned to practice after missing last week’s with an injury.

Cornerback Tyreke Johnson, safety Ronnie Hickman and linebacker Justin Hilliard were among the players who worked on the side of the team due to injury.

The linebackers were almost completely hidden from view — they practiced in the far corner of the field from where the media is allowed to view — so there was not much as far as information to gain from their drills.

But Mattison said he is high on the group, specifically mentioning how impressed he has been with Pete Werner and Tuf Borland this fall.

He said he “likes everything” about Borland’s game, and that Werner has stood out significantly in Mattison’s time here.

“I really believe he is a top guy at his position. I’ve had the opportunity to see a lot of pretty good football players and I am really impressed with him,” Mattison said. “He plays extremely hard. He’s very physical. He’s got great size and strength and he can run and he’s got unbelievable character. ”