Observations On Defense From Ohio State Practice No. 8 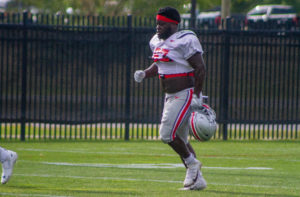 That was the emphasis of Ohio State’s practice on Saturday.

The Buckeyes held their first intrasquad scrimmage Saturday, but only made the beginning of practice available to the media, which included warm ups and the first round of position drills.

Ohio State co-defensive coordinator and secondary coach Jeff Hafley led all of the defensive backs through drills including backpedaling and reading the quarterback’s eyes to start practice.

Meanwhile, special teams coordinator and assistant secondary coach Matt Barnes took the safeties and they did similar drills, working on breaking off the route to make an interception. The corners and safeties likely split up to get more reps in this instance.

Ohio State head coach Ryan Day liked what he saw from the Scarlet and Gray secondary during practice, and like his predecessor Urban Meyer before him, said he’d have to look at the film before making any sweeping judgments.

“I think our secondary is getting their hands on a lot of balls,” Day said. “We had a couple of pick-sixes out there which was really good today. I think those guys are doing a good job.

“I want to watch the film and really grade it and see how guys graded out, but we’re going to treat it like a game and see how everybody did in terms of a grade, and then we’ll go from there.”

Day later added that sophomore linebacker K’Vaughan Pope and sophomore cornerback Sevyn Banks were the two Buckeyes who intercepted passes and took them to house.

“Really excited about that,” Day said. “That’s a huge emphasis for us this year, and proud of those guys. Those are two guys, Sevyn Banks and K’Vaughan Pope had really good camps. They’ve done really good jobs, and lo and behold they’re starting to make really good plays.”

First-year linebackers coach Al Washington, who was hired away from Michigan, led the linebacker unit through drills which emphasized footwork in run stopping — scraping over the top and filling the hole to hit the one-man sled.

Pope was at first-team linebacker alongside Malik Harrison and Tuf Borland.

Defensive line coach Larry Johnson put his athletic big men up front through an array of drills in a limited amount of time.

The defensive linemen worked on their footwork while hitting bags to start. Then, Johnson had individual defensive linemen fight to get off double teams, which were formed by two D-linemen posing as O-linemen.

“I want to get on the film and see what that was all about, but certainly the defensive line I thought did a good creating penetration,” Day said. “You felt that, and Baron Browning has shown so far that he’s really made a lot of progress in a short period of time. That’s been exciting.”