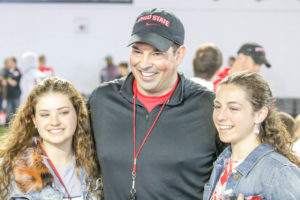 After talking about the new ‘Bullet’ position, which is a linebacker-safety hybrid, on March 21, the Buckeyes elected to not display the position in the portion of practice open to the media.

Junior safeties Brendon White and Jahsen Wint have been practicing at the ‘Bullet’ position, but did not participate when the defense and offense faced off. Instead, the starting defense featured sophomore cornerback Shaun Wade as a nickel corner.

Junior linebackers Tuf Borland and Baron Browning were not full go during practice either, and senior Malik Harrison, junior Pete Werner and sophomore Teradja Mitchell took reps at linebacker with the first-team defense.

Junior running back Demario McCall was back practicing full go. He took reps at running back with the second-team offense.

Senior defensive tackle Robert Landers and freshman safety Ronnie Hickman did not go through practice, instead doing conditioning work on the side with senior safety Jordan Fuller and junior offensive tackle Thayer Munford.