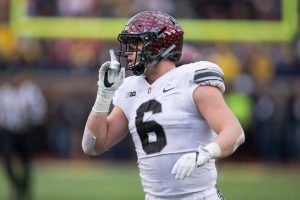 Former Ohio State athletes and alumni have taken initiative since the start of the coronavirus pandemic, which currently has infected over 2 1/2 million people in the United States.

Ohio State noted in a press release a wide variety of these notable alums that have made a difference one way or another, with the list including football alums Kirk Herbstreit, Sam Hubbard, Cardale Jones, Chris Spielman, Michael Thomas and Denzel Ward, as well as men’s basketball standout Mike Conley.

Conley, the former No. 4 pick in the 2007 NBA Draft and current member of the Utah Jazz, donated $200,000 in June to organizations in five different communities: the Utah Food Bank in Salt Lake City; CodeCrew in Memphis; Community Shelter Board and the Columbus Urban League in Columbus; the Indianapolis Public Schools Foundation in Indianapolis and the New Haven Missionary Baptist Church in West Helena, Arkansas.

Herbstreit, who now is a broadcast talent for ESPN but was formerly a quarterback for the Buckeyes from 1989-93, partnered with partnered with KIPP (Knowledge is Power Program) Columbus to donate $100,000 to local families to help pay expenses that are now more difficult due to COVID-19.

“Kirk wanted to do something that would make an immediate impact in the lives of families,” Hannah Powell, executive director at KIPP Columbus, said. “It wasn’t just about giving and making sure the money was there. He wanted to be a part of sharing this news with our families.”

Defensive end Sam Hubbard, who has been with the Cincinnati Bengals for the past two seasons, partnered with the Freestone Foodbank and currently has raised over $86,000 to help “provide approximately 250,000 meals to those in need,” according to the release.

“I’m just trying to be a little bit of a leader that way. Give people the push they need to start donating,” Hubbard said in a Bengals news release. “It’s amazing to see how they were giving $15, $25, whatever they could and it just adds up.”

With his money goal met, Spielman’s plan is to space out the money raised across 40 weeks, giving away $1,000 over 40 weeks to those in need.

Thomas, who broke the NFL record with 149 receptions last year with the New Orleans Saints, partnered with RIP Medical Debt to “relieve more than $2 million in medical bills for over 1,000 area residents.”

The Pro Bowl wide receiver did this a month after partnering with Raising Cane’s to donated “more than 3,000 meals for frontline workers from Louisiana-based Ochsner Health.”

Ward, the No. 4 pick in the 2018 NFL Draft by the Cleveland Browns assisted 21 people through his Make Them Know Your Name foundation by paying for whatever their largest monthly expense was.

“This pandemic has touched me a lot, seeing people affected by this,” Ward told USA Today Sports. “It was so unexpected. It caught people by surprise. That’s why I wanted to take a load off their back.”

For the full release on the efforts done by Ohio State alums during the COVID-19 pandemic, click here.