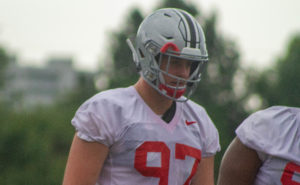 A pair of four-star prospects from the 2019 class — defensive end Noah Potter and running back Steele Chambers — are the ninth and 10th from this year’s freshmen group to lose the black stripe, and the eighth and ninth on the Ohio State roster to lose it in fall camp.

Potter, brother of former Ohio State basketball player and current Wisconsin forward Micah Potter, is a 6-foot-6, 252 pound strongside defensive end that has taken on the No. 97. While that wouldn’t be a big deal in most colleges, Potter is taking the No. 97 from two top 5 picks in the NFL Draft, Joey and Nick Bosa, who also played defensive end.

Potter is from Mentor, Ohio, and committed to the Buckeyes on April 16, 2018, and stayed committed past his brother’s transfer out of the basketball program.

Chambers came into Ohio State listed as an athlete — the 11th-best athlete in the 2019 class. He is based out of Roswell, Georgia and went to Blessed Trinity Catholic High School.

With no clear-cut second-team running back behind junior J.K. Dobbins, Ohio State now has to freshmen backs who have lose their black stripe: Chambers and Marcus Crowley.