No. 7 Ohio State Skates Past Michigan State 5-1, Senior Night Next 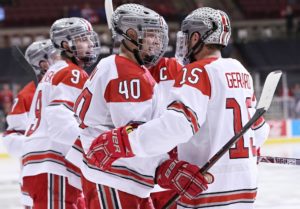 Ohio State returned to form and its winning ways in dominating Michigan State 5-1 at Value City Arena on Friday to snap a four-game winless streak before a crowd of 6,270.

Despite the skid, the No. 7 Buckeyes used a tie at Michigan last Saturday (OSU earned the extra conference point with the overtime winner) to clinch its first Big Ten regular season title.

It was also the first regular season conference championship since winning the inaugural Central Collegiate Hockey Association in 1972.

Instead of resting on their laurels, the Buckeyes (20-8-5, 13-6-4-3) dominated a perennial pest in the Spartans, who earlier this season forged a 7-7 tie in East Lansing after trailing by three goals in the third period.

There would be no comeback for the Spartans (11-17-5, 7-12-4-2) this time after junior defenseman Matt Miller gave the Buckeyes a 2-1 lead at 13:48 of the second period in the penultimate game of the regular season.

Yet, OSU coach Steve Rohlik wasn’t satisfied with the performance.

“I don’t think we played a complete game tonight,” he said. “You saw how we started the second period. I think we had three giveaways in a row, and it ended up costing us.

“For the most part we were pretty solid tonight. We played good defensively, good in the neutral zone and we scored some big goals.”

Five Buckeyes scored, led by senior Freddy Gerard’s goal and two assists.  Miller and junior Ronnie Hein each had a goal and an assist. Others to net goals were sophomore Eugene Fadyeyev and senior John Wiitala. Junior Tanner Laczynski had two assists.

The big news was that Rohlik for the first time this season broke the goalie rotation and started sophomore Tommy Nappier on a Friday. He did it so senior Sean Romeo  would be in goal for Senior Night on Saturday when the Buckeyes play the Spartans again at 5 p.m.

Nappier, who made 21 saves to improve to 12-2-3 this season, said he was informed of the switch earlier in the week.

“It’s just a hockey game to me no matter what night it is,” he said.

Fadyeyev opened the scoring at 7:18 of the first period from the left circle for his first goal of the season. The Spartans tied it at 1 on a goal by Tommy Apap at 1:21 of the second.

Miller’s fifth goal for the 2-1 lead was from a pass by Laczynski.

“Anytime you can get the lead it puts pressure on the other team,” Rohlik said.

Gerard’s score was strange. Michigan State defenseman Jerad Rosburg took a slap shot the middle part of his body, to put it nicely, and lay on the ice. Play continued and Gerard picked up the puck and fired from between the circles for his seventh goal.

“It did feel weird to keep going but I was just going to keep playing until they told me not to,” Gerard said. “Fortunately, they didn’t blow it dead and fortunately also it went into the net, so I’ll take it.”

The Buckeyes extended the lead to 4-1 at  1:51 of the third when Hein followed a shot by Gerard for his 11th goal and Wiitala got the final marker, his eighth, with a burst around the defense on the right wing before cutting to the net.

Now, it will be time to honor the seniors although they will have at least on more home game after Saturday.

“It will be pretty emotional (Saturday) but at the same time I think all of us have enjoyed our time here,” Gerard said. “As sad as we are to see it end, we still bigger things to focus on.”