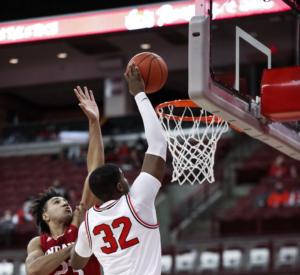 The No. 4 Ohio State men’s basketball team defeated Indiana 78-59 at Value City Arena on Feb. 13 for its sixth straight win.

Sophomore forward E.J. Liddell led the way for the Buckeyes (17-4, 11-4) in their 19-point victory over the Hoosiers (11-9, 6-7) with 19 points and fourth-year junior wing Justice Sueing added 16 points and a team-high 10 rebounds, including five offensive boards.

“He played with motor; he’s a talented kid,” Ohio State head coach Chris Holtmann said of Sueing. “He’s got to go to the glass, because that’s how he can really impact the game. He did that; he attacked the rim; he was able to attack when he needed to; made good decisions; played with force. And defensively, he was pretty sound too.”

After Sueing opened the second half with a layup, Indiana scored six straight points to cut the lead to 40-34 just 2:45 into the second half. Sueing drilled a step-back three-pointer to end the mini spurt, and Ohio State pushed its lead back to 45-36 on a hook from senior forward Kyle Young with 15:13 to play off an offensive rebound by freshman forward Zed Key.

“In the second half when that happened, it was a big momentum swing, and the team felt it,” Key said. “And we just kept going from there and never looked back.”

Back-to-back finishes by sophomore forward Trayce Jackson-Davis at the rim brought the Hoosiers back within five points at 45-40 with 14:11 on the clock. The Buckeyes bounced back with a 9-0 run, highlighted by five points by fifth-year senior guard C.J. Walker, to push their lead to 54-40 with 11:42 left at home.

“In the second half when that happened, it was a big momentum swing and the team felt it,” Key said. “And we just kept going from there and never looked back.”

Following a Jackson-Davis foul shot to make it 57-44 with 9:04 to play, the Scarlet and Gray went on an 8-0 run, featuring six free throws and highlighted by a converted and-one by Sueing.

The Hoosiers began the game with a 6-2 stretch through the opening 2:40, but the Buckeyes bounced back with a 19-0 run sparked by eight points from Liddell and seven from junior guard Duane Washington and capped by strong finishes from Key and Sueing to lead 21-6 with 10:50 until halftime.

“As we began to make the lead larger and larger, Coach continued to emphasize to keep playing and to really keep them on their heels, for real,” Sueing said. “So, that’s what we did in, and we got the outcome that we wanted.”

Ohio State pushed its first-half lead to 16 points twice, including at 31-15 with 5:21 until halftime on a hook by Young from Walker.

Indiana ripped off an 11-0 run cut the deficit to 31-26 capped by a powerful slam by Jackson-Davis with 2:16 until the midway point. Washington ended the Hoosier rally with a three-pointer on a dish from Liddell, sparking a 7-2 close to the final two minutes of the first half.

On the game, Washington scored 12 points, while Young added eight with seven rebounds. Walker added 10 points with a team-high four assists and two steals off the bench, while Key provided six points, eight boards, including five on the offensive glass, and two blocks in just 13 minutes.

“For me, it’s just to come off the bench and do what I do, which is go down there and make an impact,” Key said. “Go down and seal, be around the rim, and also on the defensive end as well — block shots, rebound, alter shots. The team feeds off that.

“When you get a blocked shot, everyone starts yelling from the bench and it gives us momentum to keep going and make a play on the offensive end. My mind-set is coming in and just doing the little things, the dirty work.”

Jackson-Davis paced the Hoosiers with 23 points and nine rebounds on 10-of-14 shooting.

“We had the ability to get the ball where we needed it offensively,” Holtmann said. “But it started there with our defense and trying to limit their effectiveness.”