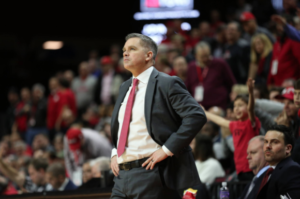 The longest losing streak of the Chris Holtmann era at Ohio State got longer on Friday night in Columbus.

The Buckeyes lost their fourth straight to No. 19 Maryland, 75-61, as the Terrapins shot a blistering 58.1 percentage from the floor, including 64.7 percent from behind the three-point arc. For comparison, Ohio State shot 23.1 percent from long range.

After committing 21 turnovers in a loss to Iowa on Jan. 12, Ohio State limited its giveaways to just 10 against the Terps, but the improvement wasn’t enough to get the victory. Kaleb Wesson, who had been limited in Ohio State’s recent outings, largely stayed out of foul trouble but managed just 11 points in the loss.

Maryland’s Anthony Cowan led all scorers with 20 on 5 of 13 shooting.

Trailing by seven at halftime, Ohio State scored the first six points of the second half, forcing Maryland head coach Mark Turgeon to call a timeout as both C.J. Jackson and Luther Muhammad converted on breakaway layups to bring the Buckeyes within a point.

Following the timeout however, Maryland rattled off a 13-2 spurt to take a 58-46 lead as the Buckeye defense routinely surrendered open looks to the Terps shooters. Ohio State would only get as close as six for the remainder of the game.

The first half was a back-and-forth affair that featured a whopping 11 lead changes and five tie scores. The Terps were finally able to make a push with just more than five minutes to play in the frame, going on an 8-0 spurt to take a 38-30 lead with 4:41 remaining in the half.

Ohio State cut the deficit to four after a lay-up from Duane Washington, but on the ensuing possession, Kaleb Wesson fouled Maryland’s Jalen Smith on a three-point attempt. Smith cashed in all three free throws to extend the Terps lead back to seven. Washington countered with a long range jumper of his own before Maryland ended the first half with a corner three from Aaron Wiggins to take a 45-38 advantage into the locker room.

Maryland shot a blistering 7 of 10 from beyond the arc in the opening frame, while Washington kept Ohio State close with 11 of his 14 points off the bench in the first half. Jackson led OSU with 15.

The Buckeyes are set to return to action Wednesday at home against Purdue. Tip is set for 7 p.m. and the game will be televised on the Big Ten Network.