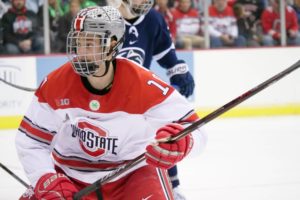 A Sunday matinee turned into a nightmare for the No. 6 Ohio State Buckeyes when No. 17 Penn State skated to a 5-1 upset at Value City Arena in a Big Ten semifinal on Sunday.

The only good news for the Buckeyes is the loss only hurts their pride, not their chances for an NCAA Tournament bid. OSU will make it for a third straight season because of its resume. The selection show is March 24.

While OSU stews, Penn State plays for the title at Notre Dame on March 23 with the winner receiving an automatic bid. The loser might not make the 16-team NCAA field.

“I’m nothing but disappointed right now,” head coach Steve Rohlik said. “We got a good hockey team in that locker room, we’ve played some really good hockey this year, we certainly weren’t at our best tonight.”

Seemingly everything that could go wrong did for the Buckeyes, winners of the Big Ten regular season by nine points over Notre Dame.

+ Ohio State (20-10-5) senior Sasha Larocque, a finalist for the Big Ten Defenseman of the Year, was ejected for a borderline contact-to-the-head penalty in the second period. The Buckeyes almost killed the 5-minute major and the momentum shift was palpable in the building when Penn State scored with 10 seconds left in the power play to go up 3-0.

+ The Buckeyes finally got some good news when junior Tanner Laczynski scored with 2:24 left in the second to make it 3-1. Hold on, the Nittany Lions successfully challenged that OSU was offside. The goal was wiped out and that was the game.

The Buckeyes had a full lineup for the first time in a while with the return of forwards Gustaf Westlund and Dakota Joshua. Westlund missed the past nine and 11 of 14 games with an injury. Joshua was suspended the past four games.

Ohio State coach Steve Rohlik knew as the season progressed that he would have a tough decision to make when it came down to a single game format because sophomore Tommy Nappier and senior Sean Romeo had evenly split the 34 starts.

The Buckeyes had a first-round bye while the Nittany Lions needed three games last weekend to dispatch Wisconsin. OSU got healthier during the break but its rustiness was evident the first period when the Nittany Lions, the highest scoring team in the nation (4.59), took a 2-0 lead.

Ironically, after Penn State had three shots in the first two minutes of the game, they didn’t have another for nearly 10 minutes until Liam Folkes scored off a pass from Alex Limoges at 11:23 to make it 1-0.

With time running out of the period, Limoges took a shot that a prone Nappier stopped, but it bounced up and into the net just before the horn.

Brandon Piro made it 3-0 at 14:52 of the second during Larocque’s penalty. Just prior to that, OSU leading scorer Mason Jobst was denied on a shorthanded breakaway.

“That was a big blow to lose our captain,” Jobst said. “If we could have just got that last little bit killed off, it would have gave us a little boost of energy when you kill a penalty like that, and that was pretty disappointing.”

Peyton Jones made 31 saves for Penn State, which had a small but vocal contingent that overwhelmed the quiet OSU fans and made it feel like a home game for the Nittany Lions.