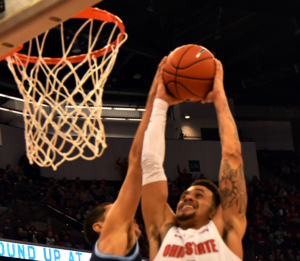 The Buckeyes struggled to start well in their first two games against Cincinnati and UMass Lowell, so when No. 10 Villanova came to town, there was cause for concern.

Ohio State vehemently answered those doubts with a red-hot start against the Wildcats that led to a convincing 76-51 victory in front of 16,419 fans at Value City Arena.

“We really came out and stuck with the game plan,” freshman guard D.J. Carton said. “We knew we had to have a big start because we’ve been starting games off slow. Us young guys just relied on the leaders and they did their thing. And I feel like we did a good job of coming off the bench and keeping that energy up.”

Washington and Walker pushed the Buckeyes to a commanding first-half lead, with 11 points and 10 points at intermission, respectively. Washington hit back-to-back three-pointers to start the game before Walker nailed a pull-up triple to send the home crowd into a frenzy and give Ohio State a 9-0 lead.

“I was just taking what the defense was giving me,” Washington said, “trusting in my teammates to find me in the right spots and just trusting my shot and knocking them down.”

The Buckeyes rolled to a 19-3 start, which they pushed to a 40-13 advantage with just 2:26 until halftime. The Wildcats showed the most life they displayed all night with a 9-0 run heading into the break, giving them hope for a comeback.

Through the first 5:40 of the second half, the Buckeyes and Wildcats went back and forth with neither side gaining a clear edge and the score at 49-30.

Then, Ohio State ignited, firing off a 13-2 rally, pushing its lead to 30 and demoralizing any hopes of a comeback for visiting Villanova. The Buckeyes’ run was highlighted by six points from Carton, including an emphatic slam dunk on an excellent bounce pass from junior forward Kyle Young that brought the Ohio State fans to their feet in a roar.

“I just knew we needed a big play and it was a good play call by Coach (Ryan Pedon) first of all, great pass by my boy Kyle, and he just put me in a great situation to make a play,” Carton said. “I didn’t really know how to react from that; it was fun celebrating with my teammates and being able to play the game I love.”

With senior wing Andre Wesson missing another game due to a fractured eye socket and sophomore wing Justin Ahrens sitting out with a sore back, sophomore guard Luther Muhammad played 34 minutes and 40 seconds and Washington started in Andre’s place, leading the Buckeyes in scoring in 26 minutes and 27 seconds. Muhammad’s solid performance was highlighted by lockdown defense and 11 points on 4-of-5 shooting, including 2 for 2 from beyond the arc.

“I thought they’ve been good these last two games,” Holtmann said of Muhammad and Washington. “I thought they would come and try to post those guys, and they did. I don’t think they would’ve done that as much with Andre, but I thought we were able to limit them from getting there enough. And those guys making shots and spreading the floor really helped our offense.”

Following the Buckeyes’ first win against a top-10 opponent since knocking off Purdue on Feb. 7, 2018, Carton, who was a high schooler at that time, was asked what he learned about the team.

“I’m having a great time on the floor with my teammates, and as long as that keeps going forward, we’ll continue to learn and progress from there.”