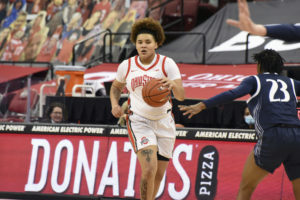 About an hour after Ohio State’s 92-87 defeat to Michigan on the men’s side, the Ohio State women’s basketball team did not fare any better, falling to the Wolverines on the road 75-66.

“We fought really hard today, all of us,” sophomore guard Jacy Sheldon said. “We played really hard, that was our main focus going into this game was give it our all 100 percent the whole game, and I think today they just played a better game than we did.”

The Michigan lead was just four, 35-31, early in the third quarter after a three-point make by Sheldon, but a 10-0 run for the Wolverines pushed their advantage to 14, and it didn’t fall below single digits until there was 2:14 to play.

Sheldon was Ohio State’s top performer all game, finishing with a team-high 26 points and shot 9 of 14 from the field. She also added two blocks and four steals, and had 17 of the Buckeyes’ 39 points in the second half.

The second-year guard hit a big three to make it an eight-point game off a Michigan turnover, and, following another Wolverines turnover, fifth-year senior guard Tanaya Beacham made a layup to make it 67-61 with 1:49 to play as part of a 9-0 Ohio State run.

But Michigan junior forward Naz Hillmon came through for the opposition, making a layup, earning a defensive rebound on the other end and then hit a shot at a free-throw line to bring the lead back up to nine and ultimately seal the victory for the Wolverines.

“That’s the mentality. I think we held onto that the whole game and that’s what you have to do in especially games like those,” Sheldon said. “The game was never out of our reach in our eyes, came up a little short, they played a better game today, but being out there, especially in the fourth quarter, you always have to have a positive mentality.”

The last time these two faced – an 81-77 Ohio State victory on Jan. 21 – the Buckeyes won despite giving up 50 points to Hillmon, the most by any player, men’s or women’s, in Michigan program history.

While she didn’t match her last performance, Hillmon still made a massive impact, finishing with 27 points and eight rebounds on 11-of-16 shooting. She did it in 31 minutes and was out for a large portion of the second half after picking up her fourth foul with 2:36 to go in the third quarter.

“She’s a tremendous player and a really hard matchup,” McGuff said. “That was part of the reason we played a little bit more zone, it’s just to kind of crowd her around the basket, so she was still very good today and obviously the last game was extraordinary point total, but still, she was very good.”

Hillmon returned with 6:36 to go in the fourth quarter, and Ohio State outscored Michigan just 10-9 during the six-minute span without the third-year forward on the floor.

Junior forward Dorka Juhasz did not have a strong performance for the Buckeyes, finishing the game with 12 rebounds, but only one point, her career low, after shooting 0 of 8 from the field. Juhasz and senior guard Braxtin Miller, the No. 2 and No. 5 scorers for the Buckeyes this season, went a combined 0 of 13 in the contest.

“She’s been so good lately and today wasn’t her day,” McGuff said on Juhasz. “They did a good job defensively on her and they were very physical with her, made her really score over them and through them, and she got some opportunities and some shots she normally makes, they just didn’t go in today.”

The Wolverines were led by junior guard Amy Dilk and Hillmon in the first half, who each had 10 points. Freshman guard Kateri Poole and Sheldon led Ohio State with nine points apiece.

Sophomore guard Madison Greene was unavailable for the Buckeyes for the second straight game, with Poole again stepping into the starting lineup. Poole finished with 14 points, five rebounds and six assists.

Next up, Ohio State will travel to face Penn State on the road. That game will take place on Feb. 24, with the time for tipoff not yet announced. This defeat ends the Ohio State-Michigan season series at 1-1, with no chance at a rematch thanks to Ohio State’s self-imposed postseason ban.

“It’s unfortunate,” Sheldon said on not potentially getting another chance at Michigan. “Every time we play the team up North it’s a big game and a game you want to win, but I think for us, we’re just going to focus on what we can get better at and focus on the next game because we have a good Penn State team coming up.”