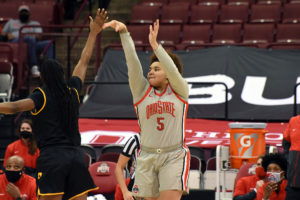 Ohio State women’s basketball picked up its first lopsided victory in weeks, taking down Minnesota 83-59 without ever trailing or without ever having the game tied after the first points of the game.

“I think it was good for the team, we got to play a lot of people, I think overall we played pretty well,” Ohio State head coach Kevin McGuff said. “Just a good win against a good Minnesota team.”

It wasn’t quite a blowout at half, with the Buckeyes leading by just nine going into the break, but after that lead was cut to 39-32 at the start of the third quarter, Ohio State began to take over.

The Buckeyes answered by going on a 15-0 run to expand the margin to 22 points. After the teams traded some baskets to make it 57-36, the Buckeyes went on another 7-0 run to really make the lead insurmountable.

Poole said at least part of the difference was finding sophomore guard Jacy Sheldon, who had 8 points on 4-of-4 shooting in the third, in transition for easy layups.

“We stopped putting the ball on the floor and we started passing, a lot of outlets were given to Jacy,” Poole said. “We go over it in practice when we get the rebound to look up, and she’s always the first one up the court, so I think that worked for us a lot.”

Ohio State led 66-41 heading into the fourth, and never had that lead did not go 20 points until there was 2:17 to play and the Buckeyes were playing deep into their bench.

Junior forward Dorka Juhasz and sophomore guard Jacy Sheldon led the way for Ohio State in scoring with 18 and 17 points, respectively. Juhasz shot 7 of 10 and brought in 10 rebounds, while Sheldon added three steals.

The Buckeyes led the Gophers 39-30 at halftime, with both teams struggling to get much of anything going in the second quarter. Ohio State (4 of 14) and Minnesota (4 of 13) combined to shoot 8 of 27 from the field in the second, while also committing 11 total turnovers (Ohio State five, Minnesota six).

Despite some sloppy play from both sides, junior forward Aaliyah Patty had a strong half, leading all players with 12 points and seven rebounds. Patty finished with a double-double of 14 points and 10 rebounds.

Sophomore guard Jasmine Powell, Minnesota’s leading scorer heading into the contest, finished with five points and four turnovers and shot just 1 of 6 from the field.

Sophomore forward Rebeka Mikulasikova did not play against Minnesota due to an illness, according to an Ohio State spokesman. She was on the sidelines for the game and previously missed matchups against Penn State and Illinois due to COVID-19 protocols.

Next up, Ohio State travels to take on Wisconsin. That game takes place at 7 p.m. on Feb. 10.