No. 10 Ohio State Uses Punts And Defense In Hard-Fought 26-6 Win Over No. 18 Michigan State 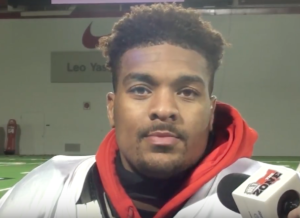 The right foot of punter Drue Chrisman, not the right arm of Dwayne Haskins, led No. 10 Ohio State to a grinding 26-6 victory over No. 18 Michigan State at Spartan Stadium on Saturday.

Chrisman’s day started abysmally with a 4-yard punt, but he recovered to pin MSU (6-4, 4-3 Big Ten) inside the 6-yard line five times in the second half to flip the field position.

The sophomore’s punts led to fumble an intentional safety on a Michigan State punt and a fumble recovery for a touchdown by junior defensive tackle Dre’Mont Jones to turn a precarious 7-6 lead into a 16-6 advantage early in the fourth quarter.

The Buckeye rushed for 120 yards with junior Mike Weber getting 104 on 22 carries and a TD. Haskins, the third-year sophomore, was 24 for 39 for 227 yards and a touchdown.

After the Buckeyes forced a punt on the first possession of the game, which included a controversial placement for a first down on a fourth-down sneak by Lewerke for a yard, OSU went three-and-out.

Only the punt by the usually reliable Chrisman was shanked into the stands. He was credited with a 4-yard punt. The Spartans took over at the OSU 35. After a 4-yard loss on a fumble by Connor Heyward and a holding call, the Spartans ended up punting from the Ohio State 34 to the 11.

Defense and poor execution were the norm early as the first six drives resulted in punts and a combined three first downs.

After one quarter, the Spartans had 75 total yards compared to 28 for the Buckeyes, including minus-7 rushing.

MSU got two first downs on its fourth possession but got nothing when Matt Coghlin missed a 51-yard field goal try early in the second quarter.

Ohio State finally moved the ball on its fifth series, but a penalty cost them to keep the game scoreless. First, though, the Spartans extended the drive after Weber was stopped shy of moving the chains on third down. MSU was offside, giving the Buckeyes a first at their 32.

Haskins went to work with completions of 25 and 16 yards to Chris Olave and an 11-yard catch by Terry McLaurin. The Buckeyes reached the MSU 17 but on second down senior guard Malcolm Pridgeon’s 15-yard hands-to-the face penalty pushed them back to the 32. A pass to K.J. Hill regained 5 yards but sophomore Blake Haubeil missed a 44-yard field goal with 6:55 left in the half.

The Spartans helped with an offside, but the big play was a 17-yard catch-and-run by Hill on third down to the MSU 33. Dobbins had three runs for 12 yards, Campbell had a catch for 5 more and third-year sophomore tight end Luke Farrell pulled in a 10-yard pass to set up first-and-goal from the 6.

Second-year sophomore quarterback Tate Martell made his first since in seven games and ran for 5 yards on a keeper. After Dobbins rushed for nothing, Campbell scored on a 1-yard touch pass.

The Spartans counter-punched when they got the ball back when Lombardi replaced Lewerke and he connected with Cody White for two passes totaling 40 yards, but the drive stalled at the 26. Needing a yard on fourth down, each team used two timeouts before Coghlin nailed a 44-yard field goal with 30 seconds left in the second quarter. The drive was seven plays, 49 yards using 39 seconds.

Punting for field position became key in third quarter and the Spartans were facing a third-and-2 from their 14 after Chrisman’s 27-yard punt.

Lombardi rambled 47 yards on a misdirection then went another 13 on the next play to place MSU at the 29.

The Spartans thought they had a touchdown on a throwback to wide receiver Cody White and his pass to an open Mike Sokol in the end zone, but the Spartans were guilty of an ineligible receiver downfield on right guard Kevin Jarvis.

Chrisman in the last minute of third put a 39-yard punt that was downed at the 1 by McLaurin. In the previous three punts Chrisman pinned the Spartans at the 5, 6 and 3.

MSU threw three incompletions then snapped the ball over the punter and out of the end zone to make it 9-6 with 42 seconds left in the third quarter.

The ensuing punt on the kickoff went out of bounds to allow OSU to start at midfield. OSU did not get a first down and Chrisman’s 44-yard punt was downed at the 1 by Johnnie Dixon.

On the first play, the snap hit Laress Nelson in motion causing a fumble. Lombardi tried to fall on it in the end zone, but junior defensive tackle Dre’Mont Jones recovered it for a touchdown and 16-6 lead with 14:03 left in the game.

After the Spartans got the ball back on the kickoff, Lombardi returned it to the Buckeyes with a muffed pitch to La’Darius Jefferson and junior defensive end Jonathan Cooper fell on it at the MSU 15.

The Buckeyes hurt themselves with a false start by Farrell and relied on a 35-yard field goal by Haubeil to go up 19-6 with 12:22 left.

OSU had a chance to put the game away after starting at their 49 after a punt Weber carried eight times for 36 yards and junior tight end Rashod Berry  had a13-yard catch. The drive reached the 4 but a bad snap by junior Michael Jordan to Martell gave the Spartans the ball at the 13.

It didn’t take long for Lewerke to turn it over when freshman safety Shaun Wade made an interception at the OSU 46 and returned it 12 yards to the MSU 42.