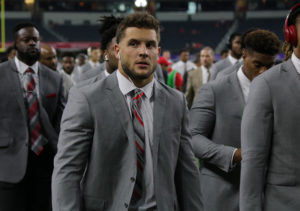 The defensive linemen underwent testing Sunday at the NFL scouting combine, where the pair of highly rated Buckeyes worked out at Lucas Oil Stadium in Indianapolis.

The All-American duo of Nick Bosa and Dre’Mont Jones completed a series of testing and drills in front of NFL scouts and executives with the hopes of improving their draft stocks.

The former Big Ten Defensive Lineman of the Year showed his versatility by finishing fourth in the three-cone drill at 7.10 seconds, seventh in the vertical jump at 33 1/2 inches and eighth in the 225-pound bench press with 29 reps.

Jones (6-2 3/4, 281) did not display the same speed as Bosa, but the talented defensive lineman moved well, especially for someone his size.

The Cleveland St. Ignatius product ran the 40-yard dash in 5.12 seconds and finished with the No. 12 time in the 20-yard shuttle at 4.53 seconds, which is stellar for a defensive tackle.

Jones completed the 3-cone drill in 7.71 seconds, and did not participate in the bench press.

Ohio State’s All-American duo showed that it is healthy, with each possessing the athleticism to go with his ability on the field.

The combine concludes March 4 with the defensive backs undergoing testing.

BSB will track the results of former Ohio State cornerback Kendall Sheffield to see if he will continue the Buckeyes’ success in Indianapolis.