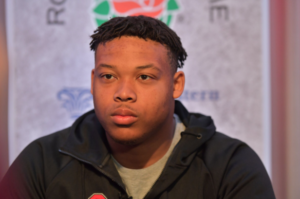 In addition to former tailback Mike Weber displaying his blazing speed in the 40-yard dash, two of his lead blockers, Isaiah Prince and Michael Jordan, underwent combine testing themselves.

The All-Big Ten first-teamer leaped 27 inches in the vertical leap.

Prince, an offensive tackle, completed 23 reps in the bench press, which is impressive given his arm length of 35 1/2 inches, which represents the third-longest among offensive line prospects.

Like Prince, Jordan also has extremely long arms, measuring at 34 1/4 inches. The long-limbed converted center put up 19 reps in the bench press, which was the fourth-lowest total among offensive linemen.

Jordan displayed his athleticism in the vertical jump, leaping 32 1/2 inches, which marked the fifth-highest bound by an offensive lineman.

Jordan completed the 20-yard shuttle in 4.71 seconds, while Prince turned in the fourth-slowest time of 5.02 seconds.

BSB will continue to track the results of former Ohio State players participating in the NFL scouting combine as they occur.