NFL Recap: How Did the Buckeyes Do Around The League? 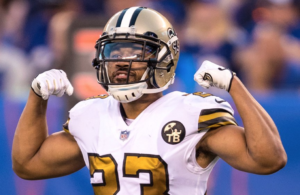 Justin Fields made his NFL debut with Chicago when the Bears traveled to Los Angeles to face the Rams Sunday night.

Bears head coach Matt Nagy named Andy Dalton the starter in the preseason and decided to stick with his decision, despite a string of impressive preseason performances from Fields.

Still, Nagy called on the rookie signal-caller three times during the season-opening game. Fields completed two passes for 10 yards and scored his first rushing touchdown from a designed quarterback run.

Jordan Fuller started at safety for the Rams. In his first game since becoming a captain in the offseason, the former sixth-round pick collected 11 tackles against the Bears — six solo and five assists. Fuller made quite an impression in Los Angeles and looked poised for another strong season.

While he did not graduate from Ohio State, quarterback Joe Burrow still holds a special place in the heart of Buckeye fans.

Burrow led the Bengals to an overtime win against the Vikings in the team’s season-opening game. After having concerns about his mental approach following knee surgery to repair multiple ligaments in his knee, Burrow often looked comfortable in the pocket.

The Athens, Ohio, native missed a few open receivers but made the throws he needed to win the game. He completed 20-of-27 passes for 261 yards and two touchdowns.

The Bengals defeated the Vikings 27-24 in OT.

Joey Bosa claimed his first sack of the season in a narrow 20-16 victory over the Football Team on Sunday. He contributed two more tackles to a talented Los Angeles front seven.

On the other side of the ball, K.J. caught three passes from quarterback Justin Herbert, totaling 30 yards. The former sixth-round pick had an impressive camp and creating a situation-based role for himself on the Chargers offense behind Keenan Allen and Mike Williams.

Terry McLaurin led the Football Team with four catches, totaling 62 yards. After quarterback Ryan Fitzpatrick went down with an injury, it took some time for the third-year wideout to get involved in the action, but he made several great catches, including this one:

Chase Young was quiet in the season-opener, collecting three tackles — one solo and two assists. The second-year defensive end earned a spot on the NFL’s Top 100 list in the offseason, so it’s fair to assume he will have better games than this in the future.

Curtis Samuel missed the game due to a groin injury. The Football Team placed the wide receiver on the injured reserve list, meaning he will not return until week four.

The Chargers defeated the Football Team 20-16.

Nick Bosa returned to action for the 49ers after suffering a torn ACL at the beginning of last season. He picked up right where he left off, dominating the Lions defensive line on his way to four tackles and a sack.

Trey Sermon — a third-round draft pick in 2021 — was a healthy scratch. It is unclear why head coach Kyle Shannahan decided to keep Sermon out of the contest, but the 49ers will need him in the future. Veteran running back Raheem Mostert suffered a season-ending injury in the game, leaving the door open for Sermon to take the reins.

Like Mostert, Jeff Okudah suffered a season-ending injury in week one. The second year tore his Achilles tendon late and will miss the remainder of the 2021-2022 season. Okudah had put together an impressive camp, and head coach Dan Campbell looked for the Ohio State product to be a foundational piece during the rebuilding year.

The Saints steamrolled, smashed and squashed the Packers 38-3 in week one, and folks, that doesn’t often happen to Green Bay.

Jenkins trailed linebacker Zack Baun for the team lead in tackles with three. Lattimore added two of his own, plus an assist. Roby didn’t play in the contest after finishing the final game of a suspension he received last season.

After the game, Lattimore agreed to a five-year, $97.6 million contract extension that could be worth up to $100 million, with $68.3 million guaranteed, sources told ESPN’s Adam Schefter. It is the largest full guarantee at signing for any cornerback in NFL history.

The Saints defeated the Packers 38-3.