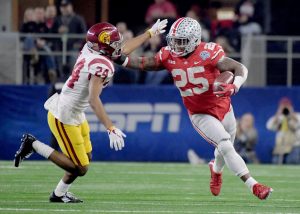 The 2019 NFL Draft Combine is underway, and 10 former Buckeyes will showcase themselves with the hopes of being selected in April’s draft. The NFL Combine takes place at Lucas Oil Stadium in Indianapolis, where the Buckeyes defeated Northwestern in the Big Ten Championship in December.

The NFL prospects will be tested physically and mentally, while trying to prove their worth to NFL scouts and executives. Each player undergoes a medical examination and is measured for their height and weight, along with arm length and hand width. The prospects also partake in a litany of physical tests, including the 40-yard dash, bench press, vertical jump, broad jump, three-cone drill, 20-yard shuttle and 60-yard shuttle. In addition to being tested physically, the prospects take the Wonderlic test, which assesses their learning and problem-solving abilities. The former student-athletes also undergo separate interviews with the media and with NFL executives.

After going through registration, orientation and interviews on Feb. 26, the special teamers, offensive linemen and running backs went through medical exams, measurements and more interviews on Feb. 27.  The former Buckeyes in that group are Prince, Jordan and Weber.

Jordan stood tall at 6-5 7/8 and 312 pounds. The First-Team All-American showed his versatility as a junior by switching from guard to center and excelling to reach national prominence. The Canton, Mich., native concluded his measurements with his hand measuring in at 10 inches and his arm being 34 1/4 inches.

Weber weighed in at 211 pounds, standing 5-9 5/8. The former Big Ten Freshman of the Year had his hand measured at 9 3/8 inches, and his arm was 29 3/4 inches long, marking the fourth-shortest arm of the 28 running backs who were measured.

The offensive lineman and running backs, along with the special teamers, will take the Wonderlic, interview with the media and complete the bench press on Feb. 28. Meanwhile, the linebackers and defensive linemen, including prospective first-round picks, Bosa and Jones, will have their registration, orientation and interviews. The quarterbacks, wide receivers and tight ends will be measured as well, including the Buckeyes’ former offensive weapons, Haskins, Campbell, McLaurin and Dixon.

BSB will track how all of Ohio State’s former student-athletes fare through the event’s conclusion on March 4.