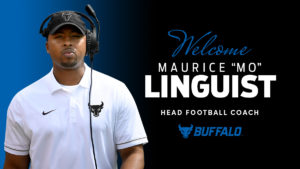 Less than four months months after Michigan hired him in the first place, Wolverines co-defensive coordinator Maurice Linguist moved on from the program, accepting a job as head coach at Buffalo.

Linguist was slated to be Michigan’s co-defensive coordinator and defensive backs coach, getting hired on Jan. 19 after on season in the NFL as the cornerbacks coach for the Dallas Cowboys.

The Linguist hire was not one that could have been easily foreseen by either Linguist or Michigan head coach Jim Harbaugh when Linguist had signed on for the Wolverines. The opening occurred after former Buffalo head coach Lance Leipold took the Kansas head coach vacancy. That job with the Jayhawks was only open after Les Miles parted ways with the team on March 8 following accusations that Miles had sexually harassed female student workers when he was head coach at LSU.

Linguist brings over a decade of experience to the Bulls job, including stops at Baylor, Iowa State, Minnesota, Mississippi State and Texas A&M, as well as two seasons as Buffalo’s defensive backs coach in 2012-13.

The Wolverines finished the 2020 season with a 2-4 record after allowing 34.5 points per game, good for the No. 95 scoring defense in the country. The poor defensive showing led to the firing of defensive coordinator Don Brown, who had been with the team since Dec. 21, 2015. Ohio State did not play Michigan last season, with the game being canceled due to COVID-19 issues within the Wolverines’ program.