NCAA Extends Recruiting Dead Period In All Sports Through August 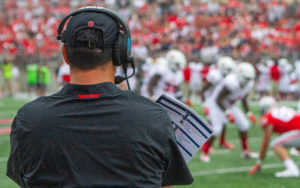 The NCAA Division I Council voted Thursday to extend the recruiting dead period for all sports through at least August 31.

“The full Council and the Council Coordination Committee will continue to review the recruiting dead periods on a regular basis,” the statement read. “A dead period precludes all in-person recruiting. Phone calls and correspondence can continue to occur.”

The Men’s and Women’s Basketball Oversight Committees also said Thursday that there will not be any recommended changes to the model that was put into place last week that allowed universities to start “summer countable athletically related activities in basketball,” which were set to begin on July 20.

Since the recruiting dead period has begun for football, Ohio State has secured seven commitments and has controlled a sizable lead in the 2021 class rankings, while also earning three early commits for the 2022 class.

The continued extension of the recruiting dead period is due to the ongoing COVID-19 pandemic that has nearly 2 1/2 million cases in the United States and over 9 1/2 million worldwide.