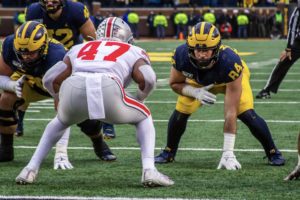 After dealing with a litany of injuries throughout this career, including tearing both biceps, his meniscus and Achilles, Ohio State fifth-year senior linebacker Justin Hilliard has been granted a sixth season by the NCAA.

Hilliard shared the news during the Buckeyes’ media availability on Wednesday evening.

“We got great news,” Hilliard said. “Originally, the process started last year, and it was something that Coach (Urban) Meyer actually mentioned to me. I had never even thought about the possibility of applying for a sixth (year) or anything like that. He came up and asked me a couple questions for some background on how long I had been rehab, which totaled up to 24 months. He helped me start the process, started the forms with compliance and then it was a waiting game.”

Hilliard — a former five-star prospect from Cincinnati St. Xavier in the class of 2015— found out about the NCAA’s ruling ahead of Ohio State’s Nov. 23 win over Penn State, which is why he did not participate in Senior Day festivities that afternoon.

“It was a great feeling,” Hilliard said. “It’s something I’ve been waiting to hear back from, but it wasn’t something I was really stressing about, kind of just let it happen. With those type of situations, you never know how it’s going to go with the NCAA, it’s all case by case. But we got great news.”

Though he certainly has the option of transferring to another school in search of more playing time, Hilliard — who has recorded a modest 11 tackles, three tackles for loss and one interception in 12 games (two starts) this season — plans to return to Ohio State next season.

“I mean, nobody comes here and envisions doing it for six years,” Hilliard said. “Every recruit thinks they’re coming here and they’re out in three. It’s been a process. I’m not going to lie. But nobody comes in wanting to do six years, but it’s something that I’m glad to be offered because of the circumstances — and finally being able to get on the field this year.

“I didn’t think this would happen at all, man. When I tore my Achilles in March, that was kind of the weirdest time. You hear Achilles tear, I’m thinking my career is over. But they set up a realistic plan for me to get back by the season, and then when I saw that progression that I wanted, it was the greatest feeling in the world. Once you get back, that’s one thing. Then you have to get back to where you were and even better. It’s been a process, but I’m happy with how it’s all turned out.”