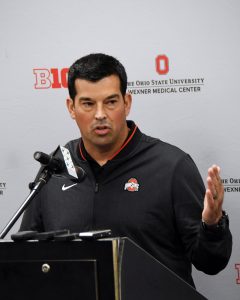 While Ohio State’s 2019 class might not be wrapped up just yet, first-year head coach Ryan Day had his program off to a strong start Wednesday afternoon.

The Buckeyes added four-star Kahuku, Hawaii, offensive guard Enokk Vimahi on National Signing Day, providing a huge boost at a position of need. Day met with the media in Columbus shortly after Vimahi’s announcement, providing isight into the 2019 class while the Buckeyes waited on a final decision from Indianapolis Ben Davis three-star offensive tackle Dawand Jones, who is set to announce his college destination at 6:30 p.m.

Here are the key notes and quotes from Day’s signing day press conference.