Meyer Investigation Expected To Be Completed Within 2 Weeks 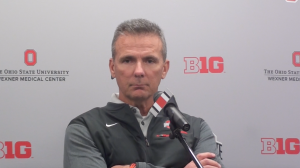 Ohio State’s investigation into allegations regarding Urban Meyer’s handling of domestic abuse allegations against a then-assistant coach in 2015 is expected to be completing within 14 days, a Sunday night university press release said.

Meyer was placed on paid administrative leave Wednesday night after a report surfaced stating that individuals close to him were aware of allegations against former Ohio State wide receivers Zach Smith by his ex-wife, Courtney Smith, in 2015. On July 24, Meyer denied knowledge of the 2015 allegations while speaking at Big Ten Media Days in Chicago.

On Friday, the same day the Buckeyes opened fall camp under the direction of offensive coordinator Ryan Day serving as acting head coach, Meyer released a statement via Twitter saying that he was aware of the 2015 allegations and went through the proper protocol at the time. He also apologized for his handling of questions posed regarding the situation at Big Ten Media Days.

Zach Smith was fired by Meyer on July 23.

Once the investigation is complete, decisions based on the findings will be made by university president Michael Drake, with consultation with the board of trustees.

“Ohio State is committed to a thorough and complete investigation,” Davidson said. “We look forward to sharing the results of this investigation and any action the university may take.”