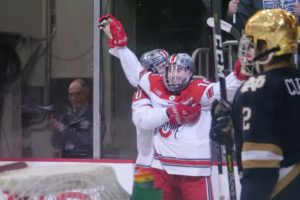 Ohio State was special in many ways, but most importantly in killing a late Notre Dame power play that could have tied the score.

The Buckeyes led 3-2 thanks to a power-play marker by senior Freddy Gerard for his second goal of the game, but the Fighting Irish were threatening in the battle of the top teams in the Big Ten at Value City Arena in Friday.

Notre Dame’s Michael Graham was alone to the left of the goal with a yawning net, but somehow senior Sean Romeo made a spectacular reaching save with his paddle with 2:42 left in the game.

The No. 4 Buckeyes held on, got an empty-netter with less than a second left by senior Brendon Kearney and defeated the No. 11 Irish 4-2 before 6,689 fans for their fourth straight win.

“He’s a big-time goalie. You’ve seen that before,” OSU coach Steve Rohlik. “He made probably an ESPN save there tonight at the end. Incredible.”

Romeo made 27 saves for the Buckeyes, who are 8-1-3 in the past 12 games to maintain a grip of the conference lead.

Graham and Cam Morrison scored, and Cale Morris made 22 saves for the Irish, but they went away empty-handed after rallying from a 2-0 deficit.

The Buckeyes killed three penalties – the Irish were called for none at that point- and took a 2-0 lead on goals by Freddy Gerard in the first (14:57) and Pooley (7:51) in the second but Notre Dame’s fourth power play turned the game around.

Graham scored with the man advantage at 9:28 to make it 2-1 and that score unnerved the Buckeyes who were already peeved with the officials, especially a boarding call on Sasha Larocque that led to the goal.

Before the puck was dropped to resume play after the goal, a referee skated to the OSU bench to for a quick word with OSU coach Steve Rohlik.

Once play began again it took only 34 seconds for the Irish to tie it on a goal by Morrison.

At the end of the second period Rohlik had an animated discussion with the officials that lasted more than three minutes.

“He was just asking about what I got for Christmas,” Rohlik said. “Just talking hockey. We were just discussing hockey and moved on from there.”

Coincidence or not, the Buckeyes drew two penalties in the first 7:18 of the third and Gerard scored the winner at 7:38 on the power play.

“We did a good job in the third coming out, skating moving our feet,” Austin Pooley said. “When we move our feet like that, we’re going to draw penalties. I thought we did a good job of that tonight.”

Junior defenseman Gordi Myer went below the goal line and fed Gerard in the slot for his fourth goal.

“He found some space to get low there,” Gerard said. “I saw a little bit of a lane. I was thinking, ‘I hope he gets me the puck.’”

The Buckeyes played without All-American forward Tanner Laczynski because of a shoulder injury sustained at Penn State on Jan. 19.

His status is unknown when the Buckeyes go for the sweep of the Irish at 8 p.m. Saturday in Value City Arena.