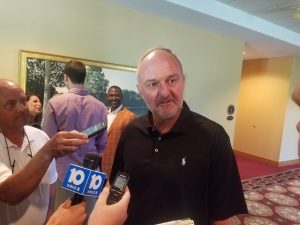 A contingent of former Ohio State basketball players who played for Thad Matta will begin competition in The Basketball Tournament, a winner-take-all event with a $2 million prize, in Columbus at Capital University’s Capital Center on Saturday.

Scarlet & Gray, the No. 1 seed in the Midwest Region, is a team comprised mostly of former Buckeyes who played at Ohio State during Matta’s 13-year tenure, which ended last summer. Those players are William Buford, Aaron Craft, Jon Diebler, Dallas Lauderdale, David Lighty, Byron Mullens (who went by B.J. Mullens during his one season at OSU in 2008-09), Greg Oden, Evan Ravenel and Jared Sullinger. Oden won’t be available for the first two rounds because he’ll be out of town.

Along with Scoonie Penn, who was a point guard at Ohio State before Matta arrived, Scarlet & Gray will be coached by Evan Turner, another Matta product.

Scarlet & Gray will play at 4 p.m. on Saturday against the winner of the play-in game between Charlotte Chess Center and the West Virginia Wildcats. Should the OSU alumni team win, it will play again on Sunday at 2 p.m.

Joining Scarlet & Gray in the Midwest Region is fourth-seeded Big X, a team that includes former Ohio State and Michigan players, in addition to alums from other Big Ten schools. Former Buckeyes Andrew Dakich, who transferred from Michigan to Ohio State last summer, Jae’Sean Tate and Kam Williams have teamed up with former Wolverines Mark Donnal, Stu Douglass, Jon Horford and Duncan Robinson. Dakich did not play for Matta, but Tate and Williams did. The other Big Ten products on Big X are Vitto Brown (Wisconsin) and Nnanna Egwu (Illinois).

Big X will face the 13th-seeded Chattanooga Trenches at 10 a.m. on Saturday. If the Big Ten alumni squad is victorious, it will play on Sunday at 4.p.m.

So seeing that 12 players from the Matta era are involved in this year’s TBT, BSB is highlighting some of the legendary coach’s top memories while at Ohio State that he shared with an audience at the Medallion Golf Club in Westerville, Ohio, on June 4, when he was recognized as the recipient of the Agonis Club’s 2018 Person of the Year Award.

The first memory Matta mentioned was Turner’s game-winning three-pointer against Michigan in the quarterfinals of the 2010 Big Ten tournament. The fifth-ranked Buckeyes, who hadn’t played in 10 days, were trailing the Wolverines, 68-66, with 2.2 seconds remaining. Having to go the length of the floor, Turner, the 2010 National Player of the Year, received the inbounds pass from Lighty, dribbled upcourt and drained a 37-footer at the buzzer to give the Buckeyes a 69-68 win.

“So we take a timeout. We’ve got two left. I tell David Lighty, ‘Look, get out there. Here’s where I want us to be. I want to see what defense they’re in and we’ll call timeout.’

“I look out and they’re not picking us up. So I look at David and said, ‘Let’s go.’ The ball is inbounded. Evan Turner catches it and dribbles it up the floor. All I’m thinking about in my mind is what I’m going to say when we get to the locker room because I knew the team had a chance to make a deep run in the NCAA Tournament.

“I’m like, ‘Do I flip out?’ Here goes the ball. It’s going, going, and I’m like, ‘Maybe I should be nice and not say anything.’ The shot goes in and I’m like, ‘We just won the basketball game.’ That was one of the weirdest moments in my time because it shows you how a coach thinks. I’m thinking about the next game while the one game is still going on.”

The next memory Matta noted was when his team played at Indiana on March 5, 2013, the Hoosiers’ Senior Night. Indiana needed a win to claim the Big Ten regular-season championship. To spoil IU’s evening, Matta may have told a fib to his players the night before the game.

“It was a 9 o’clock Tuesday tip, and (Ohio State director of operations) David (Egelhoff) knows that I didn’t like staying in hotels,” Matta recalled. “So we were going to go over there the day of the game. At 11:30 the night before, I text all of the players. This might have been made up. I can’t confirm this. But I said, ‘My security guy over there at Indiana who always takes care of me just texted me said they have backup for the riots when Indiana wins the Big Ten championship tomorrow night.’ As you would have it, we win the game by nine points (67-58).

“I remember Aaron Craft looking over at me and saying, ‘No celebration tonight, Coach.’ ”

Matta followed that story with Buford’s game-winner at Michigan State on March 4, 2012. The 10th-ranked Buckeyes needed a win over the No. 5 Spartans on the final day of the regular season to claim a share of the Big Ten crown. The Buckeyes did just that when Buford hit a long jumper over MSU guard Keith Appling with a second remaining to ultimately give OSU a 72-70 victory.

“It was a great shot,” Matta said. “It won us a share of the Big Ten championship. That was on Draymond Green’s Senior Day. Just a great moment walking into that locker room and the excitement we had there.”

Another anecdote Matta shared was Mike Conley’s game-clinching floater against Wisconsin that made Ohio State the 2006-07 Big Ten regular-season outright champions. Heading into that game, Ohio State was ranked second in the country with a 25-3 overall record and 13-1 mark in the conference. Wisconsin (26-3, 12-2) was No. 1. It was a CBS Sunday afternoon game at Value City Arena.

Leading 48-47, the Badgers missed the front end of a one-and-one free throw, and Ohio State corralled the rebound and called timeout with 15 seconds left.

“I call timeout,” Matta said. “I said, ‘Mike, here’s what we got. We’re going to run this action. I really don’t care which way you go. I trust you’ll make the right decision.’ I’ll never forget this. Greg Oden was sitting down and said, ‘That’s smart.’ I said, ‘Thanks, Greg.’ Sure enough, Michael shoots a right-handed floater, even though he’s left-handed, and we win the game (49-48).”

That, of course, also was the “gum” game, where a piece of gum fell out of Matta’s mouth onto the floor and, without hesitating, he picked it up and put it back in his mouth.

“Sure enough, I went home, turned on ESPN, and there I am. They’ve got the telestrator out. Out comes the gum. They’ve got arrows pointing at me putting it back in my mouth. I will say this. They gave me a lifetime membership to Wrigley’s gum.”

Later, Matta brought up Matt Sylvester’s three-point shot against Illinois in the last game of the 2004-05 regular season, Matta’s first campaign in Columbus.

Trying to cap the Big Ten’s first unbeaten season in 29 years, the top-ranked Fighting Illini came into the Schottenstein Center on March 6, 2005, sporting a 29-0 ledger (15-0 in league play). Matta’s Buckeyes had other plans in mind, though, as they erased a 12-point deficit in the second half and kept Illinois scoreless for the final three minutes of the game.

“Illinois misses a shot,” Matta said. “Brandon Fuss-Cheatham gets the ball and is walking the ball up the floor like there are 39 minutes left. I’m 30-some years old at the time. I’m sprinting down to half court saying, ‘Get the ball right here so we can call timeout.’ The Schott is going crazy. We have a chance to do something special.

“I go into the huddle and said, ‘Fellas, we’re going for the win.’ They started celebrating like we had already won. I said, ‘Here’s what we’re going to do.’ It was an old pin play. They start cheering and clapping. I said, ‘We’ve still got to make the shot, guys. Let me show it to you one more time. We running Tony (Stockman) off (as a decoy) since he’s our best shooter. Terence is going to pin for Matt. Matt is going to step back – we’ve got Je’Kel (Foster) over in the corner – boom.’ We break the huddle. Brandon Fuss-Cheatham turns to me – I swear to God – and goes, ‘Who am I passing to?’ I said, ‘The guy is going to be wide open.’ ”

Fuss-Cheatham found Sylvester on the right wing, in front of the Ohio State bench. Sylvester knocked down the trey to put his team up, 65-64, with 5.1 seconds to go while a capacity crowd roared.

“(Longtime Ohio State men’s basketball radio play-by-play announcer) Paul Keels wrote a book,” Matta said. “It’s coming out at the start of the football season. I had the honor of writing the foreword for it. In there, I talked about how Matt, Brandon, Tony, J.J. (Sullinger), Terence and Je’Kel should hang their names in the rafters because of what they did for Ohio State basketball. They put the stamp on it, and that game was a huge starting point.”

Matta’s final memory he touched on occurred last summer, just a few weeks after he and Ohio State parted ways. A number of his former players planned a surprise party at his house as a way to celebrate his time coaching the Buckeyes.

Celebrating Coach Matta and getting together with this group makes for a pretty great night. #ThadsBoys #Brotherhood pic.twitter.com/GrVZkiRtbQ