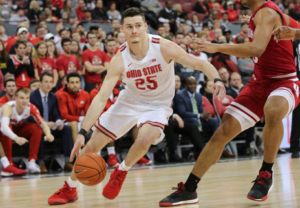 Kyle Young, Alonzo Gaffney Out For Ohio State Against Nebraska

Ohio State is heading on the road to Nebraska for a 9 p.m. matchup tonight, and will only have eight scholarship players available.

Junior forward Kyle Young and freshman forward Alonzo Gaffney will both miss the game against the Cornhuskers, as first reported by CBS Sports’ Jon Rothstein.

Young is out for an ankle injury that occurred in the Buckeyes’ previous matchup against Maryland, while Gaffney is out due to illness.

The Buckeyes lost to both Wisconsin and the Terrapins in the only two games Young has missed this season, which he missed after he had his appendix removed. Young suffered a high ankle sprain injury last season, which forced him to miss much of the 2018-19 campaign.

Young has played, and started, in 25 games for Ohio State, and has averaged 7.5 points and 5.8 rebounds per game while shooting a team high 58.5 percent from the field.

Gaffney has seen time in 17 games this season, most recently against Iowa on Feb. 20. He is averaging 1.8 points per game and 1.4 rebounds per game in just 6.7 minutes per contest.