Kevin Warren On 2020 Football Season: “I Don’t Have Any Regrets” 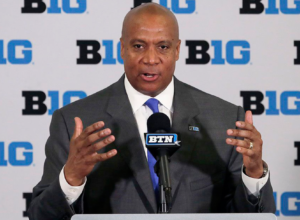 After his nearly thirty-minute remarks came to a close, Warren took questions from reporters in the gallery of Lucas Oil Stadium in Indianapolis.

Warren discussed reports of Texas and Oklahoma attempting to join the Southeastern Conference, the Big Ten’s approach to this football season and his personal experience during the pandemic.

With the final question of the press conference, Jayson Jorgenson of KRVN Radio in Lexington, Nebraska, asked the commissioner if he had any regrets for how the Big Ten handled the COVID-19 pandemic and its 2020 football season.

“I don’t have any regrets,” Warren said. “Quite naturally, we all look back on our lives and other things we wish we would have maybe done a little bit differently. But if I had the chance to do it all over last year, I would make the same decisions we made.”

In his formal comments, Warren acknowledged the difficulty of running the Big Ten during the pandemic and recognized the conference’s imperfect decisions during the football season.

Warren and the Big Ten received intense backlash from players, parents, coaches and fans for postponing the 2020 football season and the conference’s lack of clear communication throughout the pandemic.

The intensity increased when other conferences like the Big 12, Southeastern Conference and Atlantic Coast Conference would not follow suit. They chose to attempt an entire season in the fall, leaving the Big Ten behind.

Eventually, Warren and the Big Ten reversed its initial ruling, allowing the 14 member schools to compete in an all-Big Ten schedule that would consist of eight games plus a conference championship.

Despite the criticism, Warren claimed 2020 to be “one of the best years of his life” and said leading the Big Ten through the pandemic taught him to appreciate his first year as commissioner of the conference.

“This was a very complicated and complex time in our nation, in our world and in college athletics, “ Warren said. “It was complicated for all of us. This was not a perfect time for us in the conference, but it was productive. We learned — I know I personally learned — many important lessons, and I feel that we grew stronger together as a conference.”

Warren said he grew stronger in the past year. He learned to have faith in people, to build relationships and to lean on others.

“I am grateful that I had the opportunity to go through what we did last year,” Warren said. “I’m also grateful that I had the belief system to hold true to my values and my promise to keep our student-athletes and their health and safety and wellness No. 1, which I believe that we did. So last year — as I look back over my life — last year will be one of the years that I’ll look to that I continually grew as a person and that I’m grateful for to go through all the things that we went through.

“So I’m one of those people that always looks for positives, but for last year, I wouldn’t have had the number of our meetings that I had without athletic directors and our coaches and our chancellors and presidents and our fans. And so what we did allowed me to really understand the importance of relationships, the importance of communication, but also to have gratitude for life and I’m so grateful for last year, I embrace it and I’m glad to be here today.”